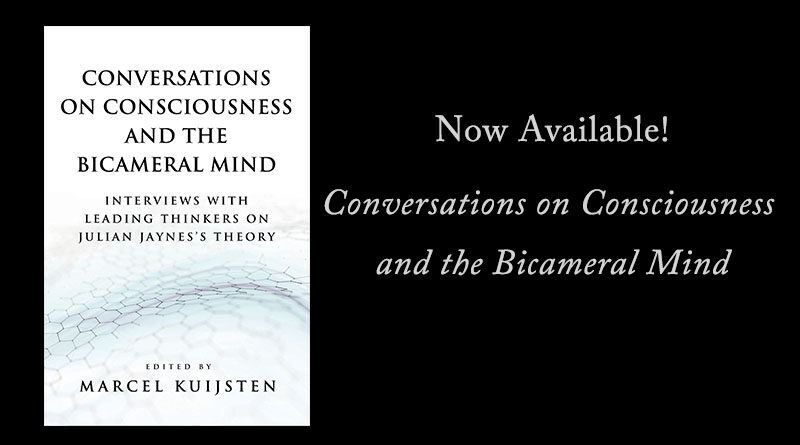 Two years in the making, Conversations on Consciousness and the Bicameral Mind: Interviews with Leading Thinkers on Julian Jaynes’s Theory is now available!

How old is consciousness? What is the relationship of consciousness and language? What is the origin of god beliefs and religion? Why do people hear voices that command their behavior? These are just a few of the fascinating questions posed by Princeton University psychologist Julian Jaynes’s influential and controversial theory and discussed in this book. A treasure trove of provocative ideas, Conversations on Consciousness and the Bicameral Mind explains, extends, clarifies, and presents the latest evidence for Jaynes’s theory in a series of highly engaging interviews with both voice-hearers and leading thinkers on the theory.

Advanced Praise for Conversations on Consciousness and the Bicameral Mind

“Julian Jaynes was my teacher in the early 1960s. … Much psychological science since then points to the possibility that he was right. Right about consciousness, right about ancient history, right about evolution, right about language, even right about Homer. This volume begins to close the gap, bringing Jaynes’s brilliance to the attention and appreciation of the contemporary public.”
— Martin Seligman, Professor of Psychology, University of Pennsylvania, and author of The Hope Circuit and Learned Optimism

“… A marvel of collective scholarship across multiple disciplines. … In this book, you will hear the voices of the most open-minded scholars of our generation.”
— William R. Woodward, Professor of Psychology, The University of New Hampshire, and author of Hermann Lotze: An Intellectual Biography

“Rich with ideas and fertile speculations, this outstanding collection of expert interviews advances the revolutionary work of the psychologist Julian Jaynes.”
— Richard Rhodes, Historian and Pulitzer Prize Laureate for The Making of the Atomic Bomb

“… It is time for a new generation of … deep thinkers at the heart of every discipline to rediscover Julian Jaynes’s tantalizing hypotheses concerning the origin and nature of human consciousness. This collection of interviews … will enable contemporary readers to understand why Jaynes’s style of inquiry remains as captivating and compelling as ever — and as provocative and controversial. Reader: take the plunge, and join the conversation!”
— Christian Y. Dupont, Ph.D., Associate University Librarian for Collections and Burns Librarian, Boston College, and author of Phenomenology in French Philosophy: Early Encounters

“… Conversations on Consciousness and the Bicameral Mind helps us understand humanity’s development of consciousness over millennia, as well as how we learn it in our first years of life.”
— Loretta Graziano Breuning, Ph.D., author of Habits of a Happy Brain, The Science of Positivity, and Status Games