Skip to content
Home > JJS Blog > Myths vs. Facts > Myth 3: “Julian Jaynes’s theory does not apply to other cultures” / “There couldn’t be a worldwide transition to consciousness” 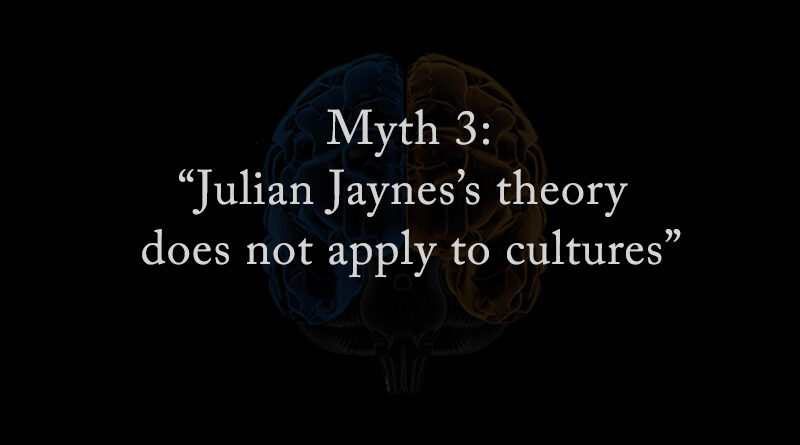 Myth 3: “Julian Jaynes’s theory does not apply to cultures outside of the Eastern Mediterranean.”
Also: “The transition to consciousness could not have happened simultaneously all around the world.”

Fact: This origin of this misconception is particularly confusing. This myth probably arose with individuals who did not read Jaynes’s book but skimmed it or read summaries which mistakenly lead them to believe Jaynes based his entire argument on ancient Greece. Jaynes focuses on Greece because the oldest reliable writing (the Iliad) comes from Greece. He also examines the evidence for his theory in ancient Egypt, Mesopotamia, and Mesoamerica. He did not know Chinese so he could not evaluate the evidence for the transition from bicamerality to consciousness in ancient China. However, this has been done by Dr. Michael Carr (see Reflections on the Dawn of Consciousness, pgs. 343-416). More recently, Todd Gibson has documented evidence for the transition from bicamerality to consciousness in ancient Tibet (see Gods, Voices and the Bicameral Mind, Chapters 14 & 15). Similar evidence for vestiges of bicameralism can be seen in nearly all pre-literate or pre-modern societies (Lévy-Bruhl, 1926). The fact that some cultures value trance states and hallucinatory experiences is evidence for Jaynes’s theory, not against it (specifically his third hypothesis), as is sometimes argued. The transition from bicamerality to consciousness took place at different times in different places around the world — Jaynes never claims that there was a “simultaneous, worldwide transition.” Finally, nothing about Jaynes’s theory implies the superiority of one culture over another.