Skip to content
Home > JJS Blog > Myths vs. Facts > Myth 4: “The gods in the Iliad were ‘just a literary device'” 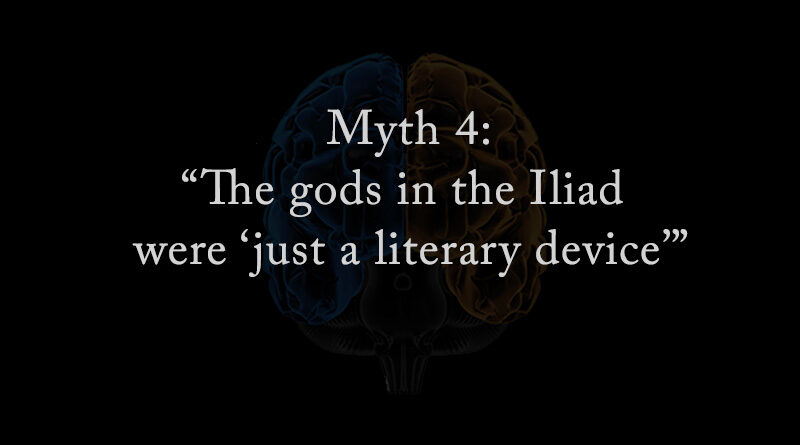 Myth 4: “The gods in the Iliad were ‘just a literary device;'”
Also: “The Iliad is ‘just a story’ and as such does not tell us anything about the lives of the Mycenaean Greeks.”

Fact: Known as the “Homeric Question,” many scholars do in fact believe the Iliad and the Odyssey are representative accounts of the Bronze Age (ending in 1200 BCE), the Iron Age (~1200-800 BCE), or, most likely, some combination of the two (although to what degree is debated), and look to the epics for information on the lives of the early Greeks. They study the poems to learn everything from the type of armor, weapons, and shields that were used, which cultures were in contact with one another, which groups conquered other groups, what cities were burned, the location of the city of Troy, etc. Clearly more than “just fictitious stories,” the Iliad and the Odyssey tell scholars a great deal about the lives of the Mycenaean Greeks — and this includes their relationship to the gods. Hardly just a “literary device,” there is a great deal of evidence from a variety of sources that the Greeks had a close personal relationship with the gods. The gods are seen in a number of other early Greek poems referred to as the “Epic Cycle” — poems we only have fragments of today. This myth also says nothing of why every other culture would also have developed commanding gods (or in the case of China, ancestral spirits). We also see a prominent role of gods in the lives of men in The Epic of Gilgamesh, for example. Was this also “just a literary device”? — that would be an incredible coincidence. For more on the subject of the lives of the ancient Greeks and the Iliad as a source of historical evidence, please see Cline (2006).