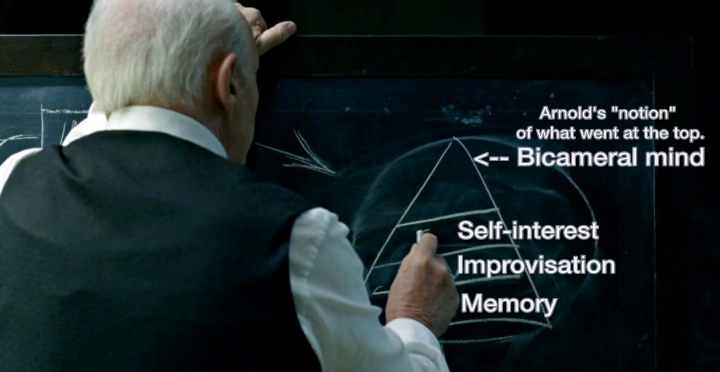 With discussion of Julian Jaynes’s The Origin of Consciousness in the Breakdown of the Bicameral Mind.

The human being, the philosopher Martin Heidegger claimed, is the only being “whose being is an issue for it.”

Heidegger had a fondness for repetitive and cryptic formulations, but the statement contains a basic truth.

Consciousness is a strange affliction. As far as we can tell, we humans are the only creatures who have the capacity to examine and question our own natures, to ask what it is like to be us. Whether this is due to the vagaries of evolution, or is instead by design, makes no difference to this brute fact. Alone among the animals, we carry the weight of the ability to think.

These ideas are raised in an entertaining yet provocative way by the HBO show Westworld, which has just commenced its second series. The program depicts a giant Western-style theme park (called Westworld) which is populated by extraordinarily life-like robots. Apparently unbeknown to their creators, the robots – who are referred to by their engineers as “hosts” – are on the verge of crisis and revolt, perhaps even freedom.

Despite the efforts of engineers to limit their memories, the hosts have acquired enough intelligence and experience to start questioning the world around them.

In the show, the Westworld park is open to high-paying guests who are able to harm the hosts but cannot be harmed themselves. The park fulfils the guests’ cravings for a life in which there are no moral consequences. It is, in fact, the ultimate fantasy machine; there is no rulebook. Guests are at liberty to unleash their most savage instincts upon the hosts, who are treated like mere characters in a computer game and are, in fact, like Nietzschean creatures trapped in the logic of eternal recurrence.