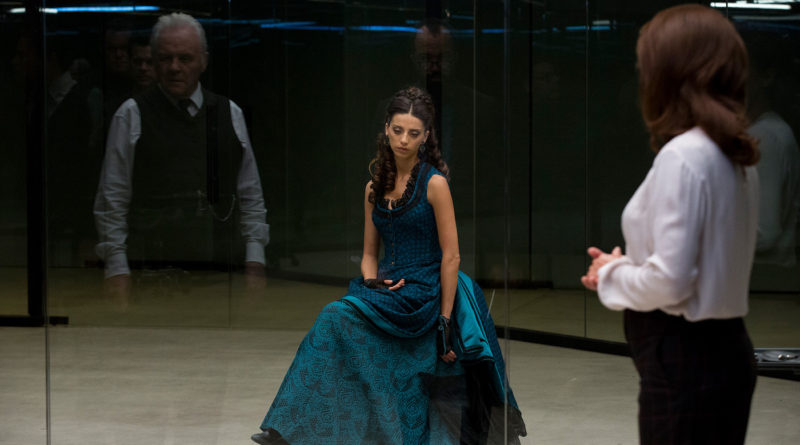 Near the beginning of Episode 7 we see Maeve is no longer responding to the technician’s commands and appears to be continuing on her path to self-awareness.

Speaking with William on the train, Dolores appears to be on a similar trajectory.

In a conversation between Bernard and Theresa, we gain more insight into the hosts’ path to consciousness. “The ability to deviate from programmed behavior arises out of the hosts’ recall of past iterations. … there’s a connection between memory and improvisation. Out of repetition comes variation, and after countless cycles of repetition these hosts — they were varying. They were on the verge of some kind of change.”

This brings us back to the first episode, and Ford’s alleged insertion of the “reveries.” But was it really Ford after all? In any case, as we’ve discussed previously, the introduction of autobiographical memory is a key element of consciousness: It requires the development of an analog ‘I’ narratizing in a mind-space, able to spatialize time and “see” one’s life on a timeline. Without consciousness, we would always be living only in the present.

The episode ends in the powerful exchange between Ford and Theresa, and the shocking discovery that Bernard is a host. Ford hints at what Julian Jaynes describes as the “consequences of consciousness,” saying, “Their lives are blissful, in a way their existence is purer than ours. Free of the burden of self-doubt.”

Ford continues: “I read the theory once that the human intellect was like peacock feathers. Just an extravagant display intended to attract a mate. All of art, literature, a bit of Mozart, William Shakespeare, Michelangelo, and the Empire State Building. Just an elaborate mating ritual. Maybe it doesn’t matter that we have accomplished so much for the basest of reasons. But, of course, the peacock can barely fly. It lives in the dirt, pecking insects out of the muck, consoling itself with its great beauty. I have come to think of so much of consciousness as a burden, a weight, and we have spared them that. Anxiety, self-loathing, guilt. The hosts are the ones who are free. Free, here, under my control.”

Julian Jaynes did not see consciousness as an adaptation for the purpose of increasing sexual attraction (this was proposed by Geoffrey Miller in The Mating Mind). But the last few sentences seem to be directly inspired by Jaynes, who tells us the many ways, both positive and negative, that consciousness operating on our emotions transforms our thought. Fear becomes anxiety, shame becomes guilt, mating behavior becomes love, anger becomes hatred.

Consciousness, for all its benefits, has come with significant costs.

(For a good discussion of this, see “The Origin of Consciousness, Gains and Losses: Walker Percy vs. Julian Jaynes” by Laura Mooneyham White in Gods, Voices, and the Bicameral Mind.)

P.S. Does anyone else think that Charlotte Hale (Tessa Thompson), the Executive Director of the Board for Delos, seems far too young for the role? But perhaps there’s more to this….there’s already a lot of speculation that she may be one of the other character’s daughters. We’ll see what unfolds…