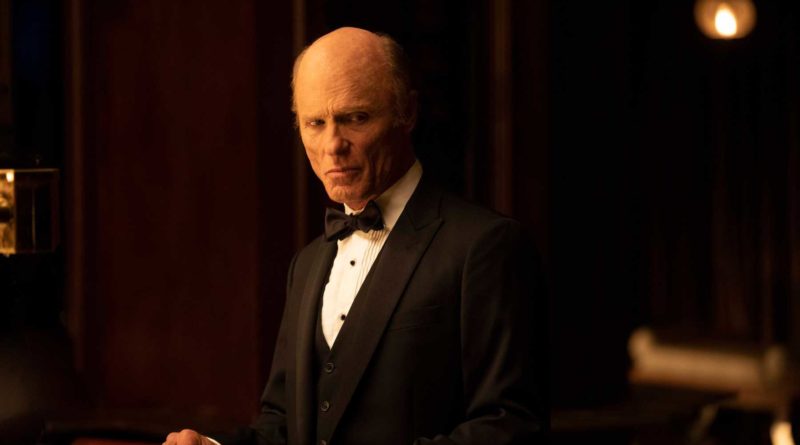 Episode 9 opens with Bernard interviewing Maeve, but she quickly assumes control of Bernard, who has lost awareness of his host status.  She issues post-hypnotic suggestion-like commands, which he dutifully carries out.

A little later we see a meeting between Bernard and Dr. Ford on one of the headquarters’ lower levels with the decommissioned hosts. When Dr. Ford says, “I built your mind Bernard, I have every right to wander through it’s rooms and chambers and halls…” we are reminded again of Jaynes’s opening lines from The Origin of Consciousness: “… an invisible mansion of all moods, musings, and mysteries, an infinite resort where each of us reigns reclusively alone, questioning what we will, commanding what we can. A hidden hermitage where we may study out the troubled book of what we have done and yet may do…” and the metaphor of physical space for our inner mind-space.

In the following scene we see Dolores experience a bicameral hallucination: “Remember.”

Next, Hector, talking to his fellow bandits, talks about “the riches the gods have in store for us” and Maeve’s prophesy about his immediate future gets his attention. Maeve also refers to the gods.

For Maeve, the “gods” are Ford and the park’s administrators who are dictating the park’s story lines and determining the hosts’ every outcome. For  ancient man, and more recent preliterate societies, the gods and spirits played a central role in their daily life in a way that’s difficult for us to comprehend. We think of gods as distant and remote, but for bicameral people, the gods were ever-present, offering commands, advice, and admonishments, guiding behavior in a way similar to the bicameral hallucinations of Arnold heard by Dolores.

In another interesting parallel, Maeve has woken up to the fact that every aspect of their lives is determined by the park’s directors: “I died with my eyes open, saw the masters that pull our strings. Our lives, our memories, our deaths are games to them…”

Yet the hosts such as Hector believe they have free will. So while the hosts’ lives are completely pre-determined while having the illusion of free will, conversely in the ancient world, bicameral people had no concept of chance and believed everything to be the will of the gods. As the bicameral voices subsided, people turned to oracles and divination to discern the will of the now-silent gods. Lots were cast to discern their wishes, which, incidentally, is the origin of gambling. It is only with the advent of consciousness that the concept of free will is born.

Later in the episode we revisit the conversation between Dr. Ford and Bernard regarding the hosts hallucinating the voice of Arnold and their discussion of Arnold’s pursuit of consciousness for the hosts via the bicameral mind.

The conversation cuts to Dolores entering the church. The religious imagery here is noteworthy. Although beyond the scope of this post, Jaynes’s theory of consciousness also explains the origin of gods and therefore religion.

Dolores enters the church, and the pews are populated by hosts talking to their bicameral hallucinations (presumably “bootstrapping consciousness”). As a side note, most people today don’t realize that a significant percentage of the “homeless” are people partially relapsing to the bicameral mind and experiencing persistent debilitating hallucinations, along with the the delusions that result from living in a world that no longer shares their experience or accepts the authority of their voices.

Dolores enters the confessional, which turns out to be an elevator, and she descends to find herself in the underground hallways of the corporate headquarters. … The fact that the headquarters are constructed entirely underground may itself be a metaphor for the ever deeper layers of the unconscious mind.

Her trip through the hallways appears to be a walk through earlier times in the park’s history, where she first encounters lights flickering and the bodies of hosts strewn about, perhaps the first “incident” that is often referred to. This is followed by a more organized scene, where she observes functioning hosts and encounters a young Dr. Ford walking past. The scene is interspersed with the ongoing present-day conversation between Ford and Bernard, with Ford reiterating his dark view of humanity and his disdain for consciousness.

We see Bernard’s first awakening, where he asks the question, “Who am I?” Ford concedes, “That is a very complex question, for which I can only offer a simple answer…”

It’s an interesting question to ponder. We tend to define ourselves by various roles, and often life changes such as divorce or the loss of a job can feel like the loss of part of our very identity. But who are we really, and how is our concept of the self and consciousness related? In “Imagination and the Dance of the Self” in The Julian Jaynes Collection, Jaynes delves into the links between consciousness and our self concept.

Toward the end of this episode, we see Dolores descend yet another flight of stairs, where she has a hallucinatory encounter with Arnold, leading her to another level of self-awareness…