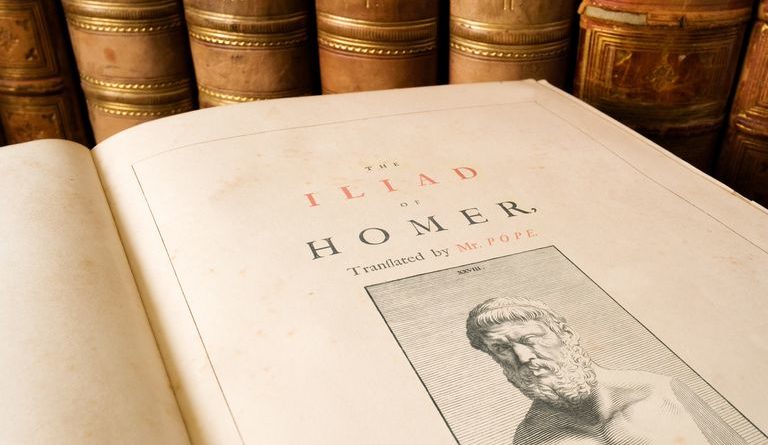 A complete translation of Homer’s Iliad, with sections cited by Jaynes in The Origin of Consciousness in the Breakdown of the Bicameral Mind, Book 1, Chapter 3, “The Mind of the Iliad” highlighted to assist those interested in further research. This translation, which is close to the one used by Jaynes, was used because it was available electronically.

The execution of this version of the ILIAD has been entrusted to the three Translators in the following three parts:

Each Translator is therefore responsible for his own portion; but the whole has been revised by all three Translators, and the rendering of passages or phrases recurring in more than one portion has been determined after deliberation in common. Even in these, however, a certain elasticity has been deemed desirable.

On a few doubtful points, though very rarely, the opinion of two of the translators has had to be adopted to the suppression of that held by the third. Thus, for instance, the Translator of Books X. – XVI. Would have preferred “c” and “us” to “k” and “os” in the spelling of all proper names.

The text followed has been that of La Roche (Leipzig, 1873), except where the adoption of a different reading has been specified in a footnote. Where the balance of evidence, external and internal, has seemed to the Translator to be against the genuineness of the passage, such passage has been enclosed in brackets [].

The Translator of Books X. – XVI. Has to thank Mr. R.W. Raper, Fellow of Trinity College, Oxford, for his valuable aid in revising the proof-sheets of these Books.

In the present Edition the translation has been carefully revised throughout, and numerous minor corrections have been made. The Notes at the end of the volume have been, with a few exceptions, omitted; one of the Translators hopes to publish very shortly a Companion to the Iliad for English readers, which will deal fully with most of the points therein referred to.

The use of square brackets has in this edition been restricted to passages where there is external evidence, such as absence from the best MSS., for believing in interpolation. One or two departures from this Rule are noticed in footnotes.

The reader will perhaps also be helped by the following list of the Greek and Latin names of the gods and goddesses who play important parts in the narrative. When the Greek names and new to him, there corresponding Latin names may be more familiar.

The sacred soil of Ilios is rent

With shaft and pit; foiled waters wander slow Through plains where Simois and Scamander went To war with gods and heroes long ago.

Not yet to dark Cassandra lying low

In rich Mycenae do the Fates relent;

The bones of Agamemnon are a show,

And ruined is his royal monument.

The dust and awful treasures of the dead

And strives to rend thy songs, too blind is she To know the crown on thine immortal head

Athwart the sunrise of our western day

The form of great Achilles, high and clear, Stands forth in arms, wielding the Pelian spear. The sanguine tides of that immortal fray,

Swept on by gods, around him surge and sway, Wherethrough the helms of many a warrior peer, Strong men and swift, their tossing plumes uprear. But stronger, swifter, goodlier he than they, More awful, more divine. Yet mark anigh;

Some fiery pang hath rent his soul within, Some hovering shade his brows encompasseth. What gifts hath Fate for all his chivalry?

Even such as hearts heroic oftenest win;