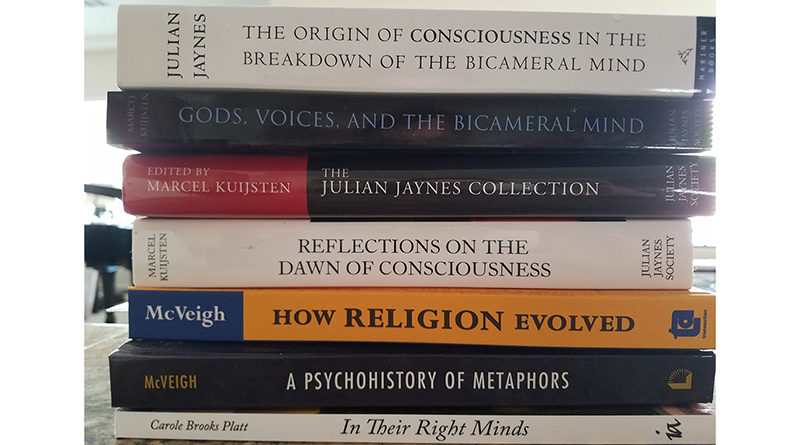 The following are the top books we recommend for those interested in learning about Julian Jaynes’s theory.

The Origin of Consciousness in the Breakdown of the Bicameral Mind
Julian Jaynes, Houghton-Mifflin, 1976, 2000.

Gods, Voices, and the Bicameral Mind: The Theories of Julian Jaynes
Marcel Kuijsten (ed.), Julian Jaynes Society, 2016.
Does consciousness inevitably arise in any sufficiently complex brain? Although widely accepted, this view — inherited from Darwin’s theory of evolution — is supported by surprisingly little evidence. Offering an alternate view of the history of the human mind, Julian Jaynes’s ideas challenge our preconceptions of not only the origin of the modern mind, but the origin of gods and religion, the nature of mental illness, and the future potential of consciousness. The tremendous explanatory power of Jaynes’s ideas force us to reevaluate much of what we thought we knew about human history.

The Julian Jaynes Collection
Marcel Kuijsten (ed.), Julian Jaynes Society, 2012.
Princeton University psychologist Julian Jaynes’s revolutionary theory on the origin of consciousness or the “modern mind” remains as relevant and thought-provoking as when it was first proposed. Supported by recent discoveries in neuroscience, Jaynes’s ideas force us to rethink conventional views of human history and psychology, and have profound implications for many aspects of modern life. Included in this volume are rare and never before seen lectures, interviews, and in-depth discussions that both clear up misconceptions as well as extend Jaynes’s theory into new areas such as the nature of the self, dreams, emotions, art, music, therapy, and the consequences and future of consciousness.

Reflections on the Dawn of Consciousness: Julian Jaynes’s Bicameral Mind Theory Revisited
Marcel Kuijsten (ed.), Julian Jaynes Society, 2007.
“In this book Marcel Kuijsten and his colleagues have integrated a quintessential collection of original thoughts concerning Jaynes’s concepts as well as some of Jaynes’s original essays. I have rarely read a manuscript that so eloquently and elegantly examines a complex and pervasive phenomenon. The contributors of this volume have integrated the concepts of psychology, anthropology, archaeology, theology, philosophy, the history of science, and modern neuroscience with such clarity it should be considered an essential text for any student of human experience.”
— from the Foreword by Dr. Michael A. Persinger, Professor of Behavioral Neuroscience, Biomolecular Sciences Program, Laurentian University

The Minds of the Bible: Speculations on the Cultural Evolution of Human Consciousness, Rabbi James Cohn
Julian Jaynes Society, 2013
In 1976, Julian Jaynes hypothesized that as recently as 2,500-3,000 years ago, human beings were non-introspective. Jaynes said that while we are acculturated from infancy on, to understand our mental life as a narratized interior mind-space in which we introspect in a ceaseless conversation with “ourselves,” our ancestors were acculturated to understand their mental life in terms of obedient responses to auditory prompts, which they hallucinated as the external voice of God. Although these “bicameral” people could think and act, they had no awareness of choices or of choosing — or of awareness itself. Jaynes claimed that one could trace this cultural transformation over the course of a scant millennium by analyzing the literature of the Hebrew Scriptures.

The ‘Other’ Psychology of Julian Jaynes: Ancient Languages, Sacred Visions, and Forgotten Mentalities, Brian J. McVeigh
Imprint Academic, 2018
Though often described as boldly iconoclastic and far ahead of its time, Jaynes’s thinking actually resonates with a “second” or “other” psychological tradition that explores the cultural-historical evolution of psyche. Brian J. McVeigh, a student of Jaynes, points out the blind spots of mainstream, establishment psychology by providing empirical support for Jaynes’s ideas on sociohistorical shifts in cognition. He argues that from around 3500 to 1000 BCE the archaeological and historical record reveals features of hallucinatory super-religiosity in every known civilization. As social pressures eroded the god-centered authority of bicamerality, an upgraded psychology of interiorized self-awareness arose during the Late Bronze Age Collapse. A key explanatory component of Jaynes’s theorizing was how metaphors constructed a mental landscape populated with “I’s” and “me’s” that replaced a declining worldview dominated by gods, ancestors, and spirits. …

How Religion Evolved: Explaining the Living Dead, Talking Idols, and Mesmerizing Monuments, Brian J. McVeigh
Transaction Publishers, 2016
Why did many religious leaders — Moses, Old Testament prophets, Zoroaster — claim they heard divine voices? Why do ancient civilizations exhibit key similarities, e.g., the living dead (treating the dead as if they were still alive); speaking idols (care and feeding of effigies); monumental mortuary architecture and houses of gods (pyramids, ziggurats, temples)? How do we explain strange behavior such as spirit possession, speaking in tongues, channeling, hypnosis, and schizophrenic hallucinations? Are these lingering vestiges of an older mentality?

Discussions with Julian Jaynes: The Nature of Consciousness and the Vagaries of Psychology, Brian J. McVeigh
Nova Science Publishers, 2016
Brian J. McVeigh, a student of Julian Jaynes, took the opportunity in 1991 to record a series of informal, wide-ranging, and unstructured discussions with Jaynes, considered a controversial maverick of the psychology world. Themes include clarifying the meaning of consciousness, the relation between consciousness and language, the history of psychology and its prejudices, implications of Jaynes’s theory for therapy, and more.

Il Nostro Inquilino Segreto: Psicologia e Psicoterapia della Coscienza
(Our Secret Tenant: Psychology and Psychotherapy of Consciousness)
Alessandro Salvini and Roberto Bottini (eds.), Italy: Ponte alle Grazie, 2011 (in Italian)
In this book are the contributions of an international group of scholars, constituted of researchers and clinicians inspired by the work of Julian Jaynes. The authors explore the plurality of the possible configurations of consciousness in its relationship with language and action. Consciousness isn’t something that exists ‘by itself’, a psychic object, but the name we give to a class of interactive operations. Among which, for example, the reflex of the relationships we entertain with our selves, with others, and with the world — a systemic ‘dialogue’ that contributes to shape the different ways of being and feeling conscious.