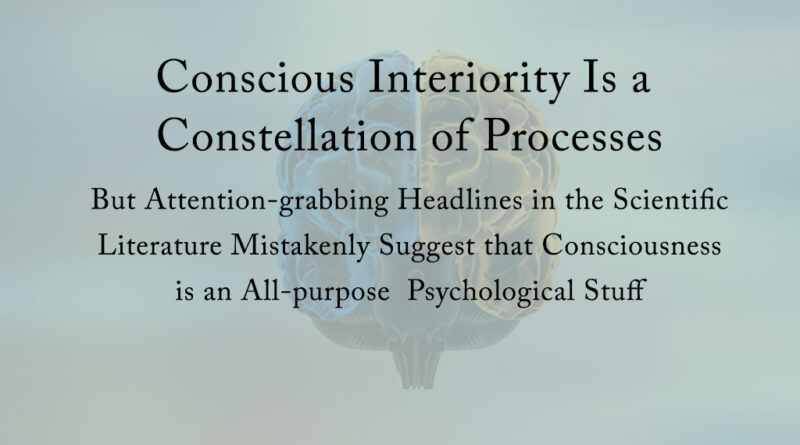 Pretend you’re from another dimension and unfamiliar with cars, planes, trains, and ships. But you quickly notice what they share in common: Motion. You’re interested in discovering exactly how these contraptions work and decide that to understand them you need to investigate motion-ness. So you begin to take them apart, piece by piece, looking for the essence of movement. However, try as you might, you can’t discover the mysterious potency animating the operation of going from point A to point B. But you’re absolutely convinced that motion-ness must exist somewhere in or around anything imbued with the power of mobility.

Of course if we want to really understand contrivances that move people from one place to the next we need to avoid a search for quintessential energies. Instead of beginning our examination of objects of mobility in an impressionistic, top-down manner, we need to initiate our inquiry in an empirical, bottom-up manner.  In other words, we need to look for particularized isolatable facts, not generalized suppositions. Science, after all, advances through the cautious itemization of features, factors, and facets, not comfortable conjectures.

In the same way our hapless extra-dimensional being is running in circles looking for an enigmatic oomph that somehow propels objects, researchers and commentators often assume that “consciousness” denotes a general purpose, do-it-all psychological vital force. Usually such a process is understood as related to being awake, aware, alert, and attentive. But my pet dog displays all these behaviors: I can easily tell when he’s not asleep and I observe him navigate expertly through the environment, respond excitingly when hearing his name, and follow the trajectory of the ball I throw. Moreover, he is certainly not conscious in the Jaynesian sense. The eye-catching headlines of popular scientific writings, as well as the titles of academic papers, often sensationalize and distort matters. Sophisticated, super-advanced tools — EEG, PET, MRI, and fMRI — afford a serious-sounding scientific veneer to scholarly work. This is not to argue that such research lacks usefulness or is “wrong” in any simple sense. The problem is that its overriding paradigm is often flawed, i.e., that some spirit-like substance called “consciousness” animates psyche. If the foundational concepts are shaky, research outcomes suffer.

The Mind: Homogeneous Psychic Stuff? Or a Complex Constellation of Features?

Does mentation, like a drop of color dye in a glass of water, diffuse and then infuse itself into the various parts of the neurological apparatus? Or do different psychic components work together to generate (the illusion) of a single mind? From a purely scientific perspective, the latter view is more tenable. The mind is derivable from a complex array of factors (neuroanatomical regions, neurochemical processes, developmental/lifespan trajectories, environmental influences, historico-cultural context, genetic expressions, etc.). Aspects of mentation, such as conscious interiority, are not derived from an amorphous mental mist.

For the sake of clarification, let’s propose two points. First, conscious interiority and mentation need to be distinguished. The former is only one small part of the latter (just as most of an iceberg’s mass floats hidden below the water’s surface, most mentation occurs nonconsciously). Second, as Jaynes went to great pains to demonstrate, conscious interiority only emerged as a cultural response to sociocultural stresses about three thousand years ago; it was not a consequence of neuroanatomical change.

The belief that a multi-purpose mental energy of some sort permeates the psyche leads not a few to believe that animals, as well as advanced AI in the future, share the same psychological stuff (“consciousness”) with humans.  Animals certainly have minds, and it always amazes this writer when people are surprised to discover just how clever non-human creatures can be. But like computers, they lack the highly-evolved mental capabilities of homo sapiens, and they most certainly do not have conscious interiority.   Research psychology needs to take a more inductive (working from observations to broad generalizations) rather than a deductive (working from broad generalizations to observations) approach in regards to conscious interiority. Progress occurs through postulating testable hypotheses, not by working from untested assumptions. While bringing findings together and forming syntheses play a vital role, breaking things down and analyzing matters are where investigations usually begin, i.e., the specific observation of data and details should come before any conclusions are drawn. Specification is a helpful antidote to speculation, but surprisingly in certain circles the quest continues for some Holy Grail of psychology often labeled “consciousness” that will explain everything.