Online Events with special guests and open discussion. We explore a wide-range of topics related to Julian Jaynes’s theory with experts from a variety of different backgrounds. Space for each event is limited so be sure to RSVP.

Open invitation to debate! Are you a scholar interested in discussing or debating Julian Jaynes’s theory? Contact Us and we’ll schedule a live online discussion or debate. 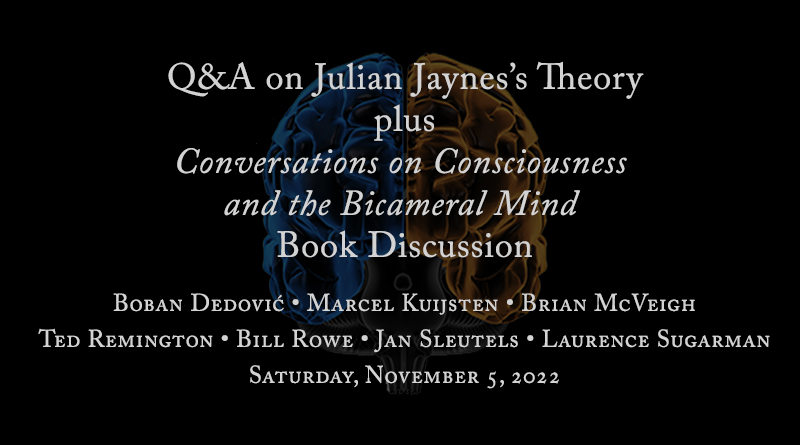 Join us for a 90-minute Q&A session with Boban Dedovic, Marcel Kuijsten, Brian McVeigh, Ted Remington, Bill Rowe, Jan Sleutels, and Laurence Sugarman. We will do our best to answer all of your questions on Julian Jaynes’s theory as well as on our latest book, Conversations on Consciousness and the Bicameral Mind.

Have questions about Jaynes’s theory? Do you still have lingering questions after reading Conversations on Consciousness and the Bicameral Mind? This is your opportunity to have them answered directly by the interviewees themselves.

This online event will be held on Saturday, November 5th, 2022 at 1pm Pacific/4pm Eastern/8pm GMT.

Free and open to the public (RSVP required).

Update: In order to make sure that there is time for everyone’s questions, we are now at capacity and no longer accepting RSVPs. Thank you everyone for your interest!

A Google Meet invitation with a link to join the event will be sent to all RSVPs.

Buy Conversations on Consciousness and the Bicameral Mind – on sale now.

No webcam or microphone? No problem — you can type your questions in the chat. If you are unable to attend, you can still participate by sending us your question in advance and watching a video of the session later.

Boban Dedović is an interdisciplinary Croatian-American technologist and researcher. An interview on his research into mental language in Homeric literature appears in the new book, Conversations on Consciousness and the Bicameral Mind, titled “The Evolution of Mental Language in the Iliad and the Odyssey.” His master’s thesis from the University of Chicago is on the evolution of mental language in the ancient Egyptian The Story of Sinuhe.

Brian J. McVeigh is an anthropologist, mental health counselor, and scholar of Jaynesian theory. His Ph.D. is from Princeton University, where he knew Julian Jaynes. He has published numerous books and articles on Jaynes’s theory, and has several interviews in the new book, Conversations on Consciousness and the Bicameral Mind, including “Evidence for Bicameral Mentality in the Bible.”

Ted Remington received his Ph.D. in rhetorical studies from the University of Iowa. He has taught writing and rhetoric at a number of different colleges and universities. His interview in Conversations on Consciousness and the Bicameral Mind is titled “Metaphor and the Rhetorical Structuring of Consciousness.”

Jan Sleutels is Professor of Philosophy at Leiden University. His teaching and research interests include metaphysics, philosophy of mind, and media philosophy. He has spoken on Jaynes’s theory at several conferences, and his interview in Conversations on Consciousness and the Bicameral Mind is titled “Julian Jaynes and Contemporary Philosophy of Mind.”

Laurence Sugarman is Research Professor and Director of the Center for Applied Psychophysiology and Self-regulation in the College of Health Sciences and Technology at the Rochester Institute of Technology (RIT), a developmental and behavioral pediatrician, and Clinical Professor in Pediatrics at the University of Rochester. An expert on clinical hypnosis, his chapter in Conversations on Consciousness and the Bicameral Mind is titled “Authorizing Clinical Hypnosis: From Bicameral Mentality to Autonomy.”

• A Google Meet calendar invitation with a link to join will be sent to your e-mail prior to the event (be sure to check spam and promotion folders if you don’t see it).
• If you are waiting to be let in and the event start time has passed, something went wrong – please try logging out and then logging back in again.
• A webcam is recommended but not required.
• If you use a webcam, you can improve video quality by closing other programs, tabs, or apps and turning off other internet-enabled devices. Make sure that you have a strong Wi-Fi signal and avoid activities that heavily use your internet connection (ensure that no one is streaming video, playing online video games, etc. on your internet connection while participating in the event).