Skip to content
Home > JJS Blog > Julian Jaynes's Theory > Consciousness Is a Cultural Add-on — A Product of History Not Reducible to Neurology, Conscious Interiority Is Like Mathematics 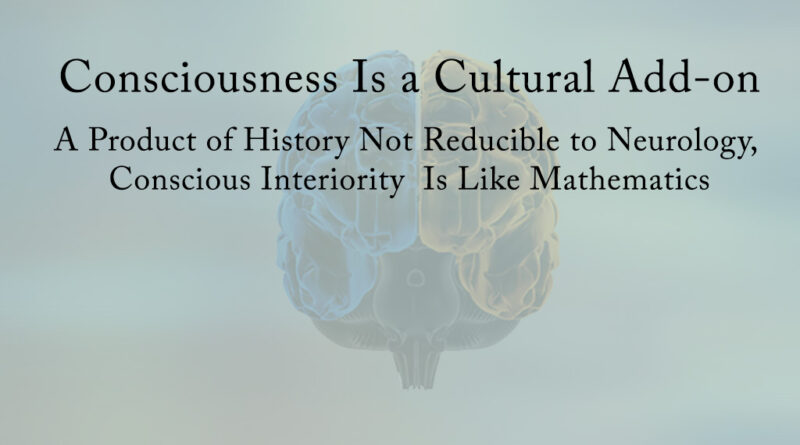 When we hear the word “consciousness” many of us, in a knee-jerk manner, associate it with neuroanatomy, neurophysiology, or something physically inborn. We also link it to perceptual or cognitive processes that are non-historical and non-cultural. However, according to Jaynesian psychology, these are all misleading assumptions since consciousness is not necessary for perception, learning, and reasoning. It is extra-genetic and a product of sociocultural forces and it entered the historical scene relatively recently, about three millennia ago. Indeed, as a culturally-configured form of knowledge, consciousness is closer to mathematics or other domains of learning. Consciousness is a very special form of knowledge, of course, but an array of socially-acquired ideas nevertheless. Let’s consider how mathematics is similar to consciousness.

First, like mathematics, consciousness is acquired culturally; it is not a direct consequence of evolutionary forces. There is nothing innate about it. The capabilities that constitute consciousness are transmitted via socialization, not genetically, and therefore they must be re-enculturated anew for each generation. Consciousness is a constellation of culturally-acquired skills.

Second, like mathematics, consciousness is profoundly shaped by sociohistorical complexity, reflecting the demands and contours of the relevant techno-economic and sociopolitical landscape. In the same way that planning and building monuments, surveying, calendrics, astronomy, commercial transactions, trade, taxation, and civil administration required mathematics, consciousness was needed to adapt to massive cultural changes. Consciousness and mathematics are both pragmatic responses to the vagaries of history.

Third, mathematics, like consciousness, has become more abstract over time (in the case of consciousness this is indicated by the evolution of specialized mind‒words). Early on, bodily parts were pressed into service for gauging size, length, width, etc., and quantities were indicated by shells, strings, sticks, beads, and quipu. It would take several millennia until the convention of Hindu‒Arabic numbers and the standardization of measurement (metric system) appeared. Though the ancient Mesopotamians and Egyptians developed multiplication tables, algebra, and geometry, it was not until the sixth century BCE that the Greeks explicitly philosophized about mathematics. Arithmetical operators (symbols) were not used until the late fifteenth century while negative numbers, though used in second-century BCE China, were suspiciously disregarded in Renaissance Europe. The intellectual development of zero, imaginary numbers, negative numbers, irrational numbers, statistics, probability, trigonometry, calculus, transfinite numbers, non-Euclidean geometry, Riemann geometrics, set theory, fuzzy math, Hilbert space with its infinite dimensions — all these attest to how socio-technological pressures expanded hypothetically and pushed the limits of the mathematical imagination. Consciousness and the expansion of mind-space followed a comparable historical trajectory. It is hard to imagine non-Euclidean geometry if one is nonliterate, mathematically undeveloped, and if one’s cosmology is confined by the earth, horizon, and sky.

Finally, in the same way we cannot claim that ancient peoples had inferior minds because they lacked calculus or non-Euclidean geometry, we cannot state that preconscious peoples who lacked subjective introspectable self-awareness were innately inferior. Though in the modern world everyone is enculturated with a baseline consciousness, this package of capabilities — conjuring up mental images, self-introspectability, self-narrativity — expresses itself in varying degrees in each individual. Arguably the same is true of numeracy and considerable variation in mathematical abilities is evident. Presumably in terms of normal distribution at one end of the bell curve some suffer from dyscalculia (disability resulting in difficulty learning or comprehending arithmetic) while at the other end others are gifted with hypercalculia (very high ability to perform calculations). Though the ability to manipulate numbers may be partially inheritable, early experiences and learning opportunities undoubtedly play a decisive role, and most individuals fall somewhere in between the extremes. Individual differences, educational experiences, and gradations of literacy ensure that, like mathematical knowledge, consciousness is variably distributed throughout a society.