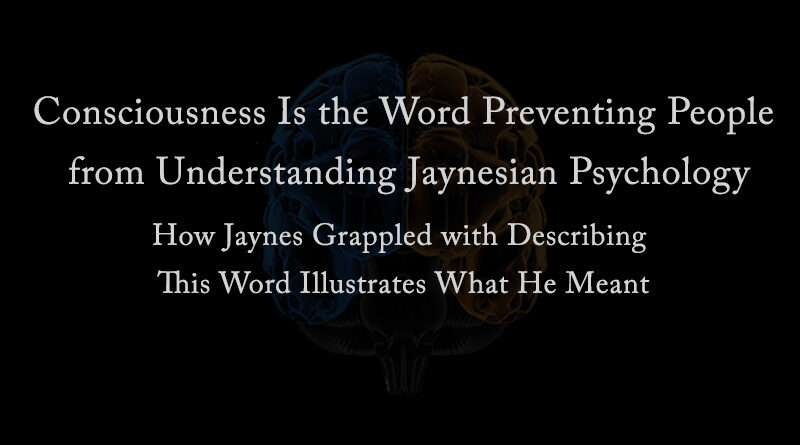 How Jaynes Grappled with Describing This Word Illustrates What He Meant

For many (mis)interpreters of Jaynes, the word consciousness acts as blank canvas upon which they draw and impose their own definitions of what they assume Jaynes meant by this term. The result is serious misunderstanding and a distortion of his arguments.

How to clear up the confusion? The obvious place to start is to look for how Jaynes himself defined consciousness in The Origin of Consciousness in the Breakdown of the Bicameral Mind (pp. 55, 65‒66). These definitions are fleshed out in an essential but much overlooked section of his book in which Jaynes explains six features of consciousness (pp. 59‒65). In a 1990 Afterword to his book, Jaynes added two more features (I have expanded this list with several of my own features). It is also vital to note well what he did not mean by consciousness (pp. 27‒44). Another commonsensical thing to do is to carefully read Jaynes in his own words rather than getting him through second-hand accounts, reviews, commentaries, critiques, etc.

An analysis of how Jaynes advanced his theories using other terminology besides “consciousness” reveals what this word meant to him. Several points stand out. First, the frequency of “subjective” is salient. Its cognates appear about one hundred times (Table 1). While not quite as precise as qualia (a philosophical term he did not use; it refers to the introspectively accessible, phenomenal aspects of our mental lives), “subjective,” like qualia, denotes first-person, quasi-sensory experientiality (what I term introception to describe the conscious counterpart of perception). One is tempted to wonder what would have happened if Jaynes had used “subjective” rather than consciousness in his book title. I strongly suspect this would have aided readers in appreciating his arguments. With all due deference to Prof. Jaynes, consider the ring of The Origin of Subjectivity in the Breakdown of the Bicameral Mind or The Origin of Subjective Consciousness in the Breakdown of the Bicameral Mind. Since we’re on the topic, other titles that come to mind are The Non-evolutionary Origins of Subjectivity, The Cultural Invention of Subjectivity, or The Historical Invention of Subjectivity.

Table 1. The Frequency of the Cognate “Subjective.”

The second point is Jaynes’s use of words that indicate the metaphorical meaning of interiority when attempting to conceptualize consciousness (33 expressions) (Table 2). Like subjectivity, the connotation of inner-ness caries a quasi-perceptual sense of an imaginary spatiality centered within the person. In my own writing I have introduced “conscious interiority” as a way to alert the reader that I am referring to Jaynes’s use of consciousness. Like introcosm (a word Jaynes used twice) “interiority” resonates with an inner, imagined location (incidentally, I have also employed the rococo “subjective introspectable self-awareness” whose wordiness is intended to drive home the meaning).

Table 3. The Frequency of Compound Expressions with “Conscious.”

When all is said and done, it remains a challenge to discuss with others a Jaynesian perspective when the most fundamental concept of his intellectual contribution — consciousness — is misunderstood. Jaynes was more than clear in his writings and lectures that he was talking about a specific form of mentation that is not perception, thinking, learning, and any other psychological processes commonly confused with consciousness. In any case, after much consideration this writer has concluded that, in order to preclude confusion and for the sake of clarity, it is probably advisable to rely on “Jaynesian consciousness” when debating with others about the merits of Jaynes’s hypotheses.