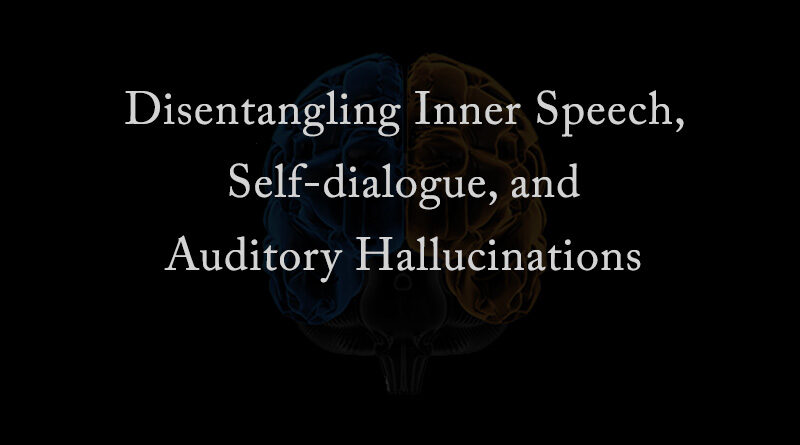 Let’s see if we can disentangle the constituents of a “hallucination‒inner speech‒thought complex” while keeping an eye open for patterns that illuminate the nature of these phenomena. I begin with several premises that guide my arguments.

The first premise, from which the others derive, is the Jaynesian perspective on bicamerality, its breakdown due to civilizational upheaval about three millennia ago, and the upgrading of human mentality, resulting in conscious interiority. Second, communication comes in two forms: verbalized and non-verbalized. The former is overt articulated speech while the latter is covert unarticulated mentation. Third, thinking is communication and communication is thinking. This is grounded in the psyche’s profound social nature and how it operates as a machine for sociopsychological communication. Fourth, “self” is shorthand for two interacting, dynamic elements of conscious interiority: (1) a “speaker” (active‒subject or “I”) and (2) a listener (passive‒object or “me”). Preconscious individuals lacked these features of consciousness. Fifth, there is no such thing as an inner monologue. The mind only operates in the dialogical mode, i.e., an audience is always present, whether it is others or our own selves. In other words, after a thought arises, it can either be: (1) turned into speech aimed at others (alter-communication) or (2) become a type of self-communication (“I” → “me”). Sixth, even when a thought is transformed into a verbalization intended for others, it still targets two audiences: (1) others (interpersonal) and (2) self (intrapersonal). Though speech is aimed at another person (“I” → “not-me”), in actuality it operates as “I” → “not-me” + “me.” In other words, when we speak to others, we simultaneously verbalize and hear ourselves speak. Such auto-hearing, as we shall see, is actually key to understanding how hallucinations evolved as a byproduct of auditory comprehension.

Below I analyze the hallucination‒inner speech‒thought complex by looking at it through the prism of the aforementioned premises and injecting some much needed historical context.

Sometime before the agricultural revolution a type of hallucinatory “auto-communication” developed, i.e., a person would “hear” his or her own voice (or possibly that of an absent clan leader). This was a side effect of language comprehension selected by socio-evolution as a method of behavioral control. This communicative circuitry reminded an individual to stay on task when carrying out repetitive chores, ensuring social order and economic productivity (preconscious individuals lacked a narratizing self that could plan long-term and envision future outcomes). The neurological substratum of this hallucinated speech is early or proto-bicamerality in which the right hemisphere would “speak” (via verbal hallucinations) to the left. The first hallucinations were not attributed to external supernatural entities (gods, ancestors, spirits). Such attribution would come later as societies became relatively larger, multi-layered, and complex by around 3000 BCE.

Hearing ourselves speak is crucial to the present discussion, since verbal hallucinations arose as an outgrowth of hearing language. In other words, hearing and hallucinations are intimately related. And hallucinations “evolved by natural selection as a method of behavioral control” (Jaynes, The Origins of Consciousness in the Breakdown of the Bicameral Mind, 1976, p. 134).

Proto-bicamerality was adequate for small-scale hunter‒gatherer economies. However, the agricultural revolution, starting sometime around 10,000 BCE, introduced social complexity whose pressures — increased demographic scale, economic specialization, more established social roles — greatly reconfigured hallucinatory auto-communication. As innovative as it was, proto-bicamerality was no match for ballooning social scale. The consequence was a neurocultural adaptation in which controlling voices were attributed to personages further up a widening and towering social pyramid — departed rulers, divinized ancestors, god-kings, the gods themselves. In other words, hallucinated voices became ideologized and the basis for a world of god-governed, priest-administered, temple-dominated, and urbanized theopolities that proclaimed the success of the momentous agrarian transformation. Complex bicamerality had replaced proto-bicamerality.

For bicameral individuals, external, articulated speech directed at others would be heard by the speaker. Such auto-hearing (auto-audition) is an obvious but important fact. However, preconscious individuals lacked a self (i.e., a speaking “I” and listening “me” were lacking). In other words, though they could nonconsciously hear their own speech they could not consciously register it. There was no psychoscape in which to experience one’s self-talk.

Though complex bicamerality was more successful in terms of handling social complexity than proto-bicamerality, even the latter neurocultural arrangement could not keep pace with rapidly increasing demographic expansion and close-quarter and concentrated settlements. These challenges increasingly eroded bicameral communicative efficacy between ruler and ruled, among the masses, and most importantly, among the different components constituting the individual psyche. The next step in neurocultural evolution was the learning of a linguistically-constructed innovation, i.e., conscious interiority. Such subjective introspectable self-awareness, evident from around 1000 BCE, helped individuals navigate a new but confusing sociopolitical landscape.

A key feature of conscious interiority is the mental spatialization or the qualia of having a “space” inside one (usually in the head). This imaginary mind-space functioned as the location of what we call inner talk. What this all means is that we should be able to trace a historical trajectory from hallucinated gods to interiorized selves. Voices that in bicameral times were believed to originate externally and were attributed to supernatural beings evolved into internally located auditory imagery that were recognized as coming from one’s self. What is referred to as inner speech, then, is the descendant of hallucinations. The silent production of words in one’s mind — or talking to one’s self quietly — is the successor to an earlier mentality. Intrapersonal communication (broadly understood, “communication with one’s self” includes self-talk, acts of imagination and visualization, remembering, planning, problem solving, monitoring our self-expectations, and evaluations of self and others [McLean, The Basics of Interpersonal Communication, 2005]). Remember, all thought is a form of communication. A person’s own thought does not have to be perceived as auditory imagery, and interestingly, not everyone experiences imagined speech or mental verbalization. Some just engage in pure thinking (“imageless thought”).

Of course, bicameral individuals possessed a self-communication of sorts, but conscious interiorization has supercharged how the psyche communicates to itself by positioning a scaled-down society of “I” and “me” “inside” the person. Conscious interiority also introduces a psychological reflexivity that is lights years ahead of chimps recognizing their body in mirrors in a stimulus-response manner. This reflexivity is part of the dynamic relationship between the “I” and “me”; this affords the individual that ineffable sense of uniqueness and separateness from others and the world.

From a practical point of view, the adaptive benefits of internal dialogue are obvious in how it permits us to rehearse possible future behaviors, revisit past events to Monday-morning quarterback one’s performance, and help emotional regulation. But the potential for obsessive self-introspection, distressing rumination, or a running commentary of self-defeating self-statements that can interfere with emotional health is the price we pay for this adaptive capability.

For conscious individuals, external, articulated speech directed at others would also be heard by the speaker. However, with such self-hearing (self-audition) one’s “me” can hear one’s “I” speak.

The Experientiality of Hallucinations, Auditory Imagery, and Thought

Two dimensions are relevant for appreciating the workings of the hallucination‒inner speech‒thought complex: (1) alien-ness versus selfness; and (2) external versus internal. The first dimension concerns authorization, or who or what affords legitimacy to one’s actions/experiences, i.e., in other words, who is governing my behavior (speech). Is the controlling entity my own “I” or is it foreign to my being, something possessed of an otherness? In the preconscious, bicameral period, control was attributed to supernatural entities (divine authorization), while in postbicameral times an individuated self has taken the place of commanding deities and spirits of the deceased (self-authorization). The second dimension concerns the perceived location of heard speech or unarticulated thought; is it within (interior) or outside (exterior) the person? Another way to view the hallucination‒inner speech‒thought complex is from the perspective of to what degree do perceptual qualities play a role. Obviously auditory hallucinations and inner hallucinations possess the quasi-perceptual qualia of hearing, while “pure” thought does not.

We might also mention that some people report that the quasi-perceptual qualities of their inner voice merges with hearing. In other words, the speaking‒hearing distinction is not necessarily clear, and seems to exist on a continuum of “speech” versus “listening.” From the perspective of the features of conscious interiority, we can posit that inner speaking is more of an active “I” process, while inner hearing is more passive and receptive (“me”).