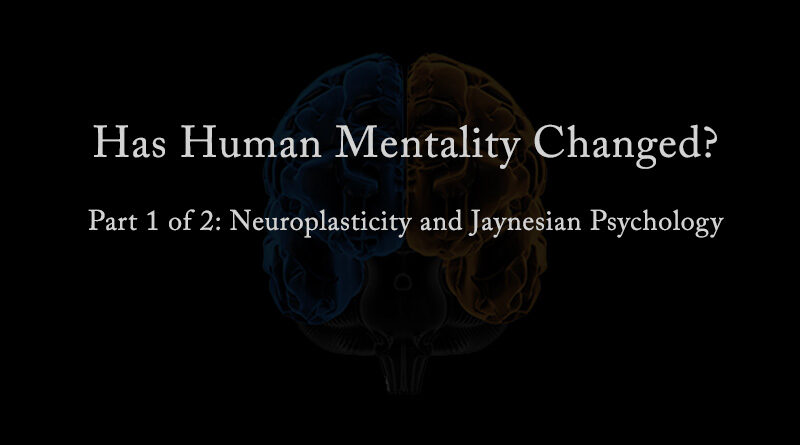 The media and scientific journals give much attention to “neuroplasticity” (the brain’s innate ability to form and reorganize synaptic connections in response to learning or injury), “neurodiversity” (variations in the brain regarding sociability, learning, attention, mood, and other various mental functions), “neurotypical,” and “neuroatypical.” From an intellectual historical perspective these terms elicit interest because they call into question, at least in a very general sense, what has been a foundational concept of the social sciences: Psychic unity. Introduced by the anthropologist Adolf Bastian (1826‒1905), psychic unity was further conceptualized early in the twentieth century as an intellectual assault on racism by enlightened, well-meaning, anthropologists. Psychic unity is a universalist idea postulating that that human mentality is more or less the same everywhere; it challenged the previously dominant view of social Darwinism that viewed societies climbing a ladder of civilizational progress. At the top were late-nineteenth century industrially-advanced societies whose technological prowess was assumed to grant them superiority. In the case of northern European and American powers, it was assumed that their “white,” Christian identity explained their success (though Japan, which was not far behind the Euro-American sphere in terms of “progress,” obviously did not rely on white racialism and Christianity to account for its achievements). Less successful societies had not acquired the cognitive capabilities to compete with those higher up the ladder of civilization. The premises of psychic unity are still prevalent among not a few psychologists and configures assumptions that restrict research, despite recent interest in neuroplasticity and neurodiversity.

Neuroplasticity, neurodiversity, etc. seem to take the individual as the basic unit of analysis. But what if we expanded the discussion to the societal level and, additionally, give culture, socializing experiences, and historical changes more prominence to add nuance to the theorizing, i.e., rather than neuroplasticity, we could speak of neurocultural plasticity. If there has been one researcher who arguably has done just that, it is the late Julian Jaynes.

Relying on a multidisciplinary approach that resulted in an ambitious archaeopsychological project (The Origin of Consciousness in the Breakdown of the Bicameral Mind, 1976), Jaynes argued that until about three millennia ago people were preconscious, lacking subjective introspectable self-awareness. Decisions were made, behavior governed, and society managed by what today we call audiovisual hallucinations generated by the right hemisphere and communicated to the left hemisphere (hence “bicameral”).

In the past these experiences were interpreted as supernatural visitations. Jaynes theorized that changes in hemispheric intercommunication and language regions explained differences in mentality. But what is significant in his arguments—and often overlooked or simply misunderstood—is that interhemispheric communications were shaped by cultural and historical forces, not biological evolution. In any case, Jaynesian psychology, and other unconventional, peripheralized perspectives (e.g., the “primitive mind” of Lucien Lévy–Bruhl, 1857–1939), boldly put on the table of inquiry psychic plasticity and diversity rather than psychic uniformity and unity.

What Does Psychic Diversity Mean?

Two caveats. First, psychic diversity, like all ideas, cannot be taken to extremes. Arguably it has animated misguided utopian dreams of political reformers, intoxicated by human perfectibility. Overly-ambitious plans for social re-engineering have turned into the nightmares of socialist and communist systems, still seen in incorrigible holdouts like North Korea. Second, the differences in mentalities throughout history and across cultures are one of degree.

In concrete terms, psychic plasticity means several things. Let’s start with an uncontroversial observation on which we all would agree. People do not all share the same assumptions, opinions, views, beliefs, and sentiments. No two individuals, even if they speak the same language, have been socialized within the same culture, and have had the same experiences, agree on everything. For example, individuals within the same family may have different views and ways of thinking about any number of topics. A daughter and her parents may have widely different opinions about who will make a good son-in-law. As any parent knows, different generational perspectives reveal different minds. This difference in minds become greater between individuals from different socioeconomic classes within the same society. Cross-culturally, these differences grow even greater. Not unexpectedly, moving backward in time increases psychological variation, and greater historical leaps reveal remarkable diversity. Such variability is more fundamental and consequential to an appreciation of homo sapiens than common understandings and the ability to empathize with our predecessors may seem to indicate.

Consider the reactions one would probably solicit from another person who is being instructed on how to use a computer. Teaching someone who grew up in the same culture and within roughly the same generation as oneself would probably acquire the skills relatively quickly (literacy and its concomitant abilities, manual dexterity and typing skill, basic understanding of office equipment such as electrical sockets, buttons, etc.). This is because there are many understandings—structured by the same cultural, political, economic, and technological forces—that are shared between the teacher and student. Now consider teaching someone from the late Victorian period. This student would undoubtedly be amazed by the computer and its applications. But what if it were possible to go back in time further, say 3,000 years ago, and meet a non-elite, uneducated commoner in Mesopotamia. Though it certainly might be possible to successfully teach this person, it would be far from easy, requiring a very long training period. Consider all the disadvantages the student would face: Illiterate (and thus lacking literacy’s highly-powered concomitant abilities, e.g., alphabetical sorting and ordering, rationalized classificatory schemes, access to vast quantities of data, highly abstract generalizing and manipulation of information, etc.); lack of fine finger coordination; an ignorance of how to utilize office equipment. The instructor—at least in my opinion—would probably conclude that this student was just not difficult to teach, but possessed of an entirely different mentality. Student and teacher would certainly be able to discuss a large range of mundane—and perhaps even not so mundane—subjects. However, because of the historical and cultural gap, they would nevertheless be separated by an unfamiliar sea of knowledge and a profound divergence in cognitive style would exist between them. The ability to communicate does not necessarily equal similar thinking.

In Part 2 of “Has Human Mentality Changed?” I look at some of the implications of psychic diversity.

2 thoughts on “Has Human Mentality Changed? Part 1 of 2: Neuroplasticity and Jaynesian Psychology”