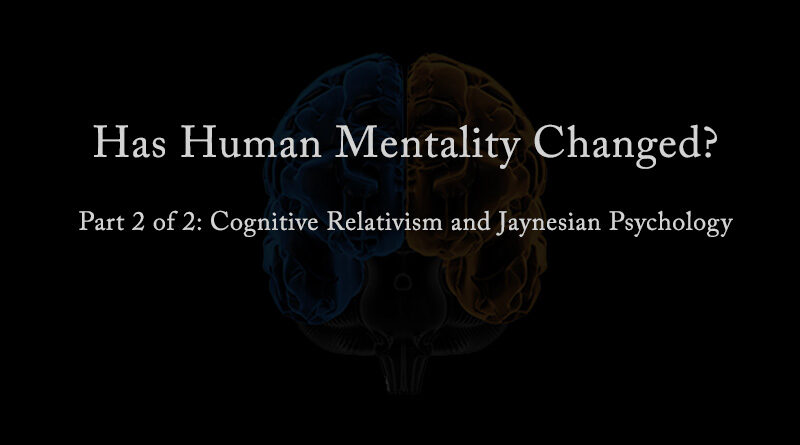 In Part 1 of “Has Human Mentality Changed?” I discussed how the contributions of Julian Jaynes bolster a radical neuroplastic understanding of the mind, especially if the crucial role of the cultural acquisitions of adaptive cognitive capabilities are incorporated into the analysis of historical changes in psychology, i.e., a neurocultural perspective. Here I want to explore some of the implications of psychic diversity. Three different perspectives illustrate well the significance of psychic plasticity. Though my present discussion is about psychic plasticity as an enculturating (extra-genetic) process, neurophysiological changes cannot be ignored (thus, “neurocultural”).

Adopting and seriously pursuing a psychic diversity research agenda presents a number of significant theoretical implications. First, it forces us to reconceptualize the relation between society and mind. In other words, psyches differ so much by period and place because of all the varied “social stuff” that constitute mentalities. Being “in society” demands that we recognize the limitations of “Psychology” (single and with a capital “P”). We should be concerned with “psychologies” (plural and with a small “p”), which are products of particular social environments and producers of repertoires of useful tools and tactics used to navigate through the everyday world. Any society (or for that matter, any individual) is equipped with an array of different cognitive strategies which are historically and socially contingent. Recognizing the importance of psychologies allows us to incorporate what are usually regarded as non-psychological (social, political, and economic forces) into understandings of psyche as a sociohistorical formation. Psychologies position the concrete and local (rather than the transcendent and universal) in the foreground of analysis, and teach us that the most interesting aspects of psyche are historically constructed, not neurologically given.

Also various forms of sociopsychological behavior — which for the most part are ignored by conventional psychology — strongly evidence that assumptions about human mentality are woefully inadequate. Consider trance, hypnosis, “spirit possession,” channeling, imaginary playmates, and nonpathological hallucinations among “voice hearers.” While looking for the common denominators that unite humanity is important, taking human diversity seriously is crucial. We need to escape from the intellectual straitjacket that while we are encouraged to speak of cultural diversity and cultural relativism, investigations of cognitive diversity and cognitive relativism are taboo. The assumptions of cognitive homogeneity and cognitive sameness may seem safe, but they hinder explorations of the myriad ways of being human, both past and present. The recognition and depiction of psychic diversity allow us to avoid the aridity and platitudes of a nondescript “common humanity.”