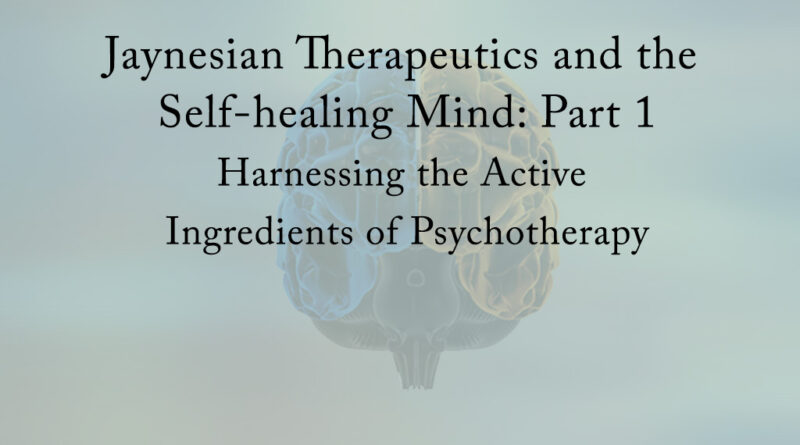 It is an interesting fact that the success rates for different psychotherapies are about the same. This is why researchers have searched for “common factors” that facilitate the healing process. The goal, then, should be to discover the common “active ingredients” of all therapies, e.g., the personality of the therapist, the “therapeutic alliance.” Could consciousness itself constitute a common factor that can be cultivated in order to repair troubled minds? Could consciousness underlie the effectiveness of the self-healing mind?

Jaynes never developed in any full-fledged manner the therapeutic value of what he understood to be conscious interiority. However, he did note that if the nature of consciousness is better theorized, the therapeutic mechanisms of treatments could be better understood. So Jaynes affords a “strong theoretical framework” for guided imagery, paradoxical therapy, visualizing practices, and other cognition-changing, reframing, and restructuring interventions. He believed that consciousness can be retrained in healthy ways. The type of therapy does not matter as long as the patient believes it can provide relief and “redirects behavior into more adaptive modes” (The Julian Jaynes Collection, 2012, p. 319). He had an optimistic opinion of the power of the mind to improve itself: An “enormous future in people realizing how much they can control themselves, and how much perhaps they can change themselves and change their way of thinking. We all know the concept of psychosomatic disease; well let’s reverse that to psychosomatic health” (The Julian Jaynes Collection, 2012, p. 288). Learning how to become more suggestible allows control over behavior than is possible with ordinary, everyday consciousness. He hoped that consciousness can “develop into perhaps better kinds of self-control, until, for example, those of us who want to give up smoking can just make a decision to do so, and that’s all there is to it. I think we might be able to train consciousness so that we are suggestible to ourselves to a greater deal” (The Julian Jaynes Collection, 2012, p. 345).

Let’s look at two examples of FOCI that aid in healing the mind: Mental images and self-narratization.

Metaphors of place linguistically cavitate the body (e.g., “in my head,” “in my heart”), hollowing out a psychoscape “visible” only to the mind’s eye of the individual. Spatialization is the cornerstone of our ability to adopt an imaginary, conjectural, and subjunctive mentality; it is a place to more clearly formulate goals and objectives. It affords one a simulated stage on which one can rehearse behaviors that require practice or are too risky if carried out in the physical world. For this reason mental imagery is a staple of therapeutic interventions (e.g., to treat phobias, PTSD, etc.). Mental space also affords a place to visualize different selves and grants a virtual location for “loosening techniques” so that alternative possibilities, and mental experimentation with opposite behaviors of what we would usually do can be performed (e.g., trying something new, leaving one’s comfort zone).

Spatialization allows us to spread out time as a succession of events upon which we can imagine ourselves moving, towards the past or a future that has not yet even occurred. Once detached from the limitations of physical reality, edited mental sceneries provide the “I” not just with a panorama of previous and current events, but with hypothetical and imaginary “could be’s,” “maybe’s,” “should be’s,” as well as future possibilities. The need to make sense of events is a fundamental human need, but we often get derailed from perceiving matters clearly or we put up defenses to avoid dealing with painful thoughts. “Insight” occurs when a patient steps back and is able to see things from a new perspective, to have an understanding of why things have progressed the way they have. One patient, wistfully looking back at his life and recognizing how previous experiences shaped his outlook, told me “The past, that’s what built me. Now I want to take the house down and rebuild it.”

Based on the notion that storytelling determines the meaning we attribute to our experiences and that individuals are experts on their own lives, Narrative Therapy views people as constructing their own worldviews and advocates the idea that we can rewrite our stories. Such stories do not merely mirror life but shape it. By showing people that the meanings they attach to their life stories play an active role in self-conception allows them to re-author their personal narratives. The goals of Narrative Therapy is to help individuals recognize what forces have influenced their narratives (e.g., familial dynamics, self-expectations). Specifically, such stories may include feelings of regret, guilt, shame, or self-blame. How we regard our personal timeline shapes our motivation and self-autonomy. We cannot travel back in time to undo things. However, self-narratization makes us capable of visualizing and hypothesizing the place we have not traveled to yet, allowing us to envision new paths and plans.

Processing our narrated selves is a skill. The past can be problematic for those who have been abused. People, whether therapists, counselors, or patients, are works in progress, unfolding through time. There is a temporal aspect about being a person that is inherent to our existence, i.e., we have no choice but to advance, to move forward. The hope is that when tomorrow arrives we can help others by revealing their inner strengths and showing them how to bootstrap their way through the vagaries and vicissitudes of life.

Though psyche’s recuperative properties can correct distorted cognition and grant us remarkable adaptive abilities, FOCI sometimes spiral out of control, resulting in excessive, hyper-interiorized consciousness and certain mental disorders. But snowballing FOCI, which result in maladaptive processes, can be restrained by using other FOCI.

Conscious interiority, a massive reworking of mentality from about three thousand years ago, presents a “good news, bad news” scenario, i.e., it provides us with advantages as well as disadvantages. As an adaptation, interiorized cognition provided a host of benefits, allowing an individual to adopt a more hypothetical stance toward the environment. Such hypotheticality inserts a question mark into one’s engagement with the world and encourages an as-if, propositional attitude; it also kindles a healthy skepticism. Through excerption and consilience we can reframe our experiences; come to know ourselves better (recognize our untapped, hidden talents and innate potentialities, as well as our faults); go beyond what we ordinarily believe and expand our perspectives via meta-framing; bootstrap our way out of self-defeating cognitions and behaviors; attain self-actualization; and perhaps develop a transpersonal self.

However, the capabilities of conscious interiority that allow us to overcome obstacles also have a darker side; they can drive us to needlessly doubt what is indicated by objective reality. The same processes that permit us to dream of a better future, hypothesize new ideas, and radically improve ourselves also cause us to worry about what might happen, become unnecessarily aggrieved, and hold ourselves back. When stuck in overdrive, FOCI set in motion runaway cognition, providing the potential for mental disorders. The bad news is that we do not know ourselves as well as we think we do, so that robust self-masking tendencies lead to self-deception; self-damaging habituation; self-sabotaging; self-propagandizing; self-indoctrinating; and other self-destructive behaviors.

Filled with visions of “new and improved” lives, people structure their personal worldview on the basis of an array of should’s, ought’s, must’s, and absolutist thinking. Due to misperceptions, misinterpretations, or dysfunctional views of situations, a “systematic bias” or “cognitive shift” is generated. Certain attitudes contribute to these shifts, making people experience the world through a distorted lens. In this way cognitive vulnerabilities are created. Consequently, individuals engage in “demandingness” that result from wishful thinking and magical thinking. To satisfy our distorted demands, we procrastinate and avoid thinking things through, ending up with illogical deductions. The tangled circuitry of our mind, with its hodge-podge of jury-rigged components, is prone to convoluted, over-communication; it spins into existence entire worlds of florid desires and unachievable fantasies. The human tendency to turn preferences into demands appears to be a particularly modern problem, supercharged by technology delivering instantaneous want-satisfaction.

In Part 2 we examine anomalous psychological experiences—hallucinations, hypnosis, and meditation—and what lessons they hold for the self-healing mind from a Jaynesian perspective.