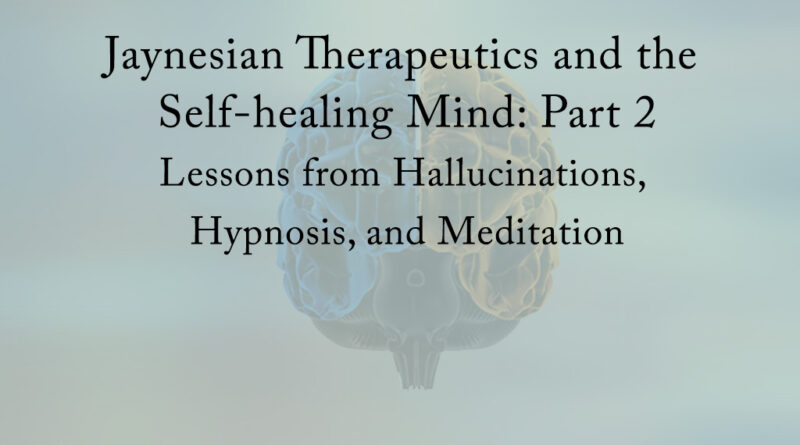 In Part 1 we looked at how something we take for granted — consciousness — is actually an active ingredient that can aid in the repair of the mind for certain mental disorders. In this Part we explore how anomalous psychological experiences hold lessons for how consciousness relates to the self-healing mind. Various manifestations of mentality — ordinary consciousness, hallucinations, hypnosis, meditation — are like a colorful tapestry with different patterns but woven together with the same threads. The challenge is disentangling and isolating the threads so as to understand the psychological processes behind these phenomena, especially since this can help understand the therapeutic benefits of certain mental exercises.

The Normalcy of Hallucinations

We assume that hallucinations are inherently psychopathological. However, if Jaynes is correct then such experiences were part of an earlier mentality that was normal. He believed that “It relieves a great deal of the associated distress of ‘Being crazy’ by getting the patient to realize that many of his or her symptoms are a relapse to an older mentality that was perfectly normal at one time but no longer works” (Jaynes, The Julian Jaynes Collection, 2012, p. 319). Hallucinations in themselves may not be neurologically pathological, though they can be psychologically distressing (they might accompany or indicate serious dysfunction). A biologically-based psychiatry with its medico-physical explanations is inadequate for acknowledging the actual experiences of voice-hearers. Others have acknowledged that hallucinations in and of themselves are not pathological; indeed, if properly dealt with, hallucinations can be potentially positive. In “Empowering people Who Hear Voices” (1996) Romme and Escher argue that hearing voices has a functional role in aiding people to cope with the problems of daily life. Corstens, Longden, and May utilize a therapeutic approach called “Talking with Voices” (the title of their 2012 article) and explore what is expressed by the voices people hear. Their approach is derived from Voice Dialogue developed by Stone and Stone, authors of Embracing Ourselves: The Voice Dialogue Training Manual. The Stones (1989) postulated that selves are composed of “sub-personalities” that require re-integration. Corstens, Longden, and May explain how the therapist acts a “facilitator” who directly engages with the different selves (e.g., primary or dominant selves that push away “disowned selves”) in order to raise awareness of the meaning and origin of voices.

Hypnosis: Temporally Turning Off Consciousness to Reset the Mind

Meditation can help some patients learn how to better regulate their attention and concentration. This contemplative practice cultivates insight, objective observations about experience, and self-reflexivity. Research beginning in the late 1970s on meditation tended to focus on its physiological aspects, with symptom reduction and alleviation being major interests. Recent research has given more attention to topics such as personal development, enhancement, and cultivation of qualities that lead to positive growth. There are two types.

The first type of mediation is concentrative (or focused concentration). This is an attempt, in a nonanalytic, nonjudgmental manner, to restrict awareness by directing and converging attention on a single object of meditation and to more keenly experience it. The object may be external or internal to the meditator (breath, mantra, a single word, scriptural passage, religious icons). The “I” intently excerpts and introceives some object. Meanwhile peripheral perceptual stimuli or stray thoughts are ignored. The second type is mindfulness meditation. The goal is to attend to all stimuli in both one’s exterior perceptual field and interiorized psychoscape. One attends in a calm, detached manner to whatever is parading past one’s mind’s eye. However, the meditator does not focus on one particular object or excerption. The key is to avoid becoming caught up on a singular sensation, mentally attached to a particular stimulus, or to ruminate on some topic that bobs up and down on the ocean of our mind. This allows our “I” to quietly observe the moment-to-moment flux of introceptions marching before our mind’s eye. Mindfulness meditation can be at first quite challenging, as it demonstrates how unbridled, undisciplined, and noisy our thoughts are. It is a humbling experience to learn how much self-control we lack.