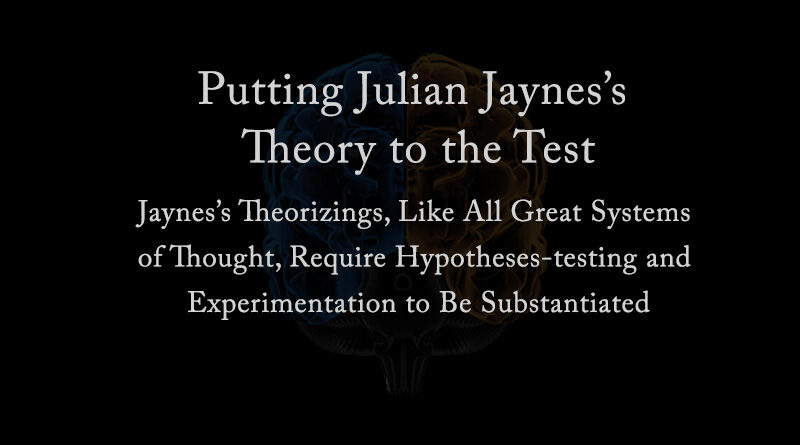 Jaynes’s Theorizings, Like All Great Systems of Thought, Require Hypotheses-testing and Experimentation to Be Substantiated

It is easy to forget that the Newtonian, Darwinian, and Einsteinian intellectual edifices were built over many years, painstakingly solidified brick by brick through batteries of well-designed experiments and careful analyses. Science is the sturdy house that such patient construction continually erects.

Consider the work of Julian Jaynes. Over the years I have heard many dismissively say “it’s an interesting theory but it can’t be proved.” Such remarks demonstrate a misunderstanding of the nature of scientific progress as well as what is needed to come to terms with Jaynesian theorizing. The contributions of Jaynes constitute an entire paradigm that reaches far beyond psychology. It is a constellation of bold, innovative ideas with far-ranging implications and great breadth that sheds new light on neurology, history, religious studies, psychotherapeutics, archaeology, linguistics, philosophy, literature, and other arts. So what is needed, then, is a breaking down of Jaynes’s core theories into numerous propositions, postulations, and hypotheses appropriate to different disciplines and fields of expertise. That way his claims can be systematically tested. That is a tall order and demands the contributions of a legion of specialists.

In any case, no one neuroscientific experiment or psychological study will, in one fell swoop and once and for all “(dis)prove” Jaynes’s ideas. Rather, an array of thoughtful examinations, focused investigations, and discriminating inquiries are necessary to confirm the Jaynesian paradigm.

There are many directions one might go in to develop statistical-amenable hypotheses in order to test the Jaynesian system of thought. In my The “Other” Psychology of Julian Jaynes: Ancient Languages, Sacred Visions, and Forgotten Mentalities and The Psychology of the Bible: Explaining Divine Voices and Visions I have developed and applied two testable propositions, the Bicameral Civilizational Inventory (BCI) and the Embryonic Psycholexicon (EmPL) hypotheses (the interested reader is also directed to Boban Dedovic’s ‘Minds’ in ‘Homer’: A quantitative psycholinguistic comparison of the Iliad and Odyssey).

The BCI hypothesis postulates that from around 3500 to 1000 BCE the same list of certain features characterized all cultural cores without exception. The emphases, combinations, and permutations of the BCI traits vary by place and period, but generally as list of ingredients are to be found in all preconscious cultures. The challenge is to find one society that does not fit the pattern of bicamerality (or a culture that lacks bicameral vestiges) rather than one that does. Elements of the BCI have built upon each other through the centuries, forming worldwide stratigraphic psychological patterns as revealed in the archaeological and historical record. The most robust evidence for bicamerality appears in Mesopotamia and Egypt beginning around 3500 and 3000 BCE, respectively. Compared to Eurasian societies, bicameral features emerged later in North, South, and Central America. The development of post-bicamerality indicates a major rupture in human history, roughly corresponding to the Late Bronze Age Collapse in the Mediterranean and Middle East. A corollary of the BCI hypothesis is the Post-Bicameral Civilization Inventory (PBCI) hypothesis that itemizes vestiges of what once were bicameral societies.

Another testable proposition is the Embryonic Psycholexicon (EmPL) hypothesis. If Jaynes is correct that individuals lacked conscious interiority before about 1000 BCE, then this should be reflected in language. The EmPL hypothesis is intended to test his argument. “Embryonic” points to a weakly developed psychologicality whose linguistic forms were incipient and primordial, i.e., the first mental words were substratal building blocks upon which more abstract forms would be constructed to reflect ever increasing sociopsychological complexity. The EmPL hypothesis proposes a number of characteristics that can be assessed. First, Bronze Age psycholexicons appear restricted in size. Super-religiosity accounts for this, i.e., bicamerality means that supernatural entities (gods, ancestors, etc.) functioned as our inner selves. If this is the case, the need for an inventory of mental words would have been limited. A well-developed, nuanced psychological vocabulary was simply unnecessary. Therefore the further one goes back in time, the fewer psycholexicons one encounters in the written record. A second characteristic of archaic psycholexemes is their literal, behavioralist quality. Related to the second postulate is the third: the concreteness and physicality of elemental psycholexemes is reflected in their colorful metaphorical nature. Physical behaviors were “interiorized” into a mind-space that developed into subjective “mental behaviors” (i.e., conscious interiority). The evolution of psychological lexemes took centuries, but resulted in a powerful cognitive adaptation that permitted individuals to “mentally travel” to the past and future, thereby greatly enhancing planning, organizing, and abstracting capabilities.

A Roadmap for Future Research

Portions of The Origin of Consciousness in the Breakdown of the Bicameral Mind are admittedly more speculative than others, and some in need of qualification, though Jaynes always stood ready to amend his thinking (e.g., in an afterword written in 1991 Jaynes downplayed the role of the Thera eruption in the breakdown of bicameral mentality). But the genius of Jaynes shines through in how his work coherently fits together neurological processes, religious history, and anomalous psychological behavior (hallucinations, hypnosis, spirit possession) into an interlocking argument that explains global patterns. The value of The Origin is in something Jaynes himself stressed: His book should not be regarded as the final word — it is a blueprint, an outline, a map for further explorations and scholarly agendas. If a Jaynesian paradigm passes enough tests, then entire shelves of textbooks will have to be rewritten or at least drastically revised. This will excite some but most assuredly upset many.

2 thoughts on “Putting Julian Jaynes’s Theory to the Test”