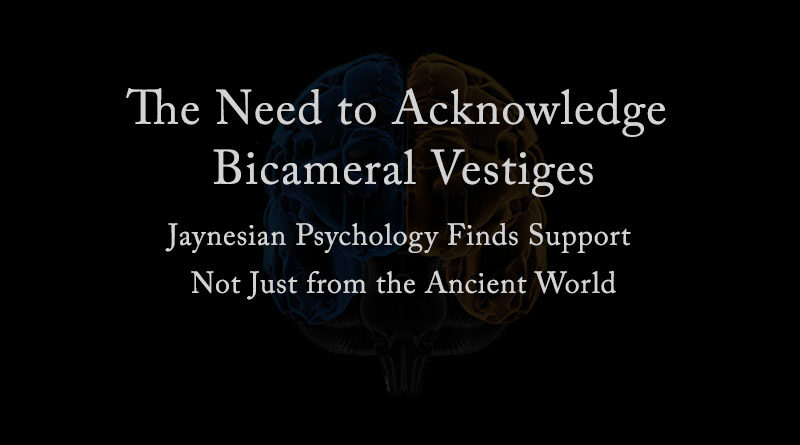 This post is inspired by a recent exchange I had with a commentator who saw little value in relying on biblical accounts as evidence to support Jaynes’s theories because they were “fairytales.” Presumably such a criticism could be extended to other writings that constitute humanity’s extensive religious tradition. It is worth responding to this line of critique because it is not an uncommon reaction from those who find fault with Jaynes (and for what it’s worth, Jaynes did not set out to explain the origins of religion; his research was on the origin of consciousness).

Many of those who have read The Origin of Consciousness in the Breakdown of the Bicameral Mind are drawn to what Jaynes wrote about long-forgotten civilizations and ancient religions. Safely tucked away in the historical past, we do not have to face what is disturbingly different. But Jaynes devoted entire chapters to the holdovers from our earlier mentality, i.e., hypnosis, hallucinations among schizophrenics, and spirit possession (other related topics treated in passing are childhood imaginary friends and glossolalia). Despite notable exceptions, unfortunately, for a long-time certain topics were not regarded as worthy of serious investigation by mainstream psychologists, being written off as uselessly psychopathological, shunned to “primitive” and peripheral societies, or even associated with the paranormal (admittedly hypnosis is a more contested, complicated case). There is also, I suspect, an anti-religion bias for some of those who see little value in humankind’s spiritual traditions (which is indeed ironic since Jaynes’s arguments can be used as powerful ammunition by the atheist crowd), especially if those elements of religiosity are closer to home. I remember presenting my research on spirit possession at conferences. The same anthropologists who were interested in the people I studied in Japan were disdainful of Christians who “spoke in tongues” from their own society (North America). It was as if anomalous behavior, at least for some anthropologists, only mattered as something scholarly if it occurred in “exotic” locales.

Jaynes’s theories become much more persuasive when one surveys the remainders of bicamerality. Bronze Age textual and archaeological evidence only takes us so far. We need to take seriously, from an academic perspective, the present where the leftovers of bicamerality still haunt modern civilizations. Note that we cannot view these vestiges as loitering around aimlessly as if ghosts lost in the wrong century. This is because even now they perform important sociological functions, as alien as they may be to us.

A good place to start is with ethnography. One needs to take into account the overwhelming number of reports and chronicles from non- or preliterate “tribal societies.” Much of this material was recorded in the eighteenth and nineteenth centuries by explorers, adventurers, missionaries, conquerors, and assorted agents of imperialism. These accounts were not ethnographers in the modern sense, but in any case more recently anthropologists have left and are still providing detailed accounts of divination, spirit possession, shamanism, and ancestor worship. These various supernatural beliefs and behaviors are not silly superstitions sideshows; they are culturally front and center, playing a vital role in the daily life of these small-scale communities.

So this is the problem: We are so used to hearing about anomalous psychosocial practices, as unfamiliar as they are to us, that we assume there’s something inevitable about them, as if they naturally sprout up wherever humans form communities. Then in a very unscientific manner we fail to ask very basic questions: Why are they found in all societies? Why aren’t there any exceptions in terms of global patterns? What do they say about the workings of the human psyche? One would think that if such practices were related to fantastical fairytales, there would exist somewhere cultures that evolved and did just fine without bizarre, unscientific beliefs. To date no such culture has been found.

How Scientism Distorts Our View of the Human Condition

Many fall into the common trap of scientism. This reactionary approach to knowledge means being overly picky about what is respectable or worthy research subjects, quickly dismissing what cannot be readily explained, and having a particularly difficult time taking anything seriously that smacks of the spiritual. Scientism is legitimized by modernity’s “official” (though unstated and implicit) hierarchy of knowledge. Some of us take this hierarchy too seriously. This laddered organization of accumulated learning is arranged so that the closer one approaches the top, the closer one is supposedly to the unvarnished, objective truth. At the lowest level are made-up folktales, magical practices, and unfounded fables found in faraway places. This bottom, more “primitive” level reeks of irrationalities and nonsensical notions.

The next level, at least for some, is a bit more respectable: Religion. Though still clouded by questionable legends and the mythical, in the last century or two religion has worked hard to make peace with relentless scientific progress by carving out its own place in the modern world. It has discarded the more objectionable remnants of spirituality (e.g., burning witches at the stake, inquisitions, sacrificing virgins). Interestingly monotheism for some reason is more acceptable to the modern mind (“Western”?) than polytheism. The latter, while actually still followed in many parts of the world, is for some associated with “pagan” belief systems that historically predate or fall outside the Abrahamic lineage of Judaism, Christianity, and Islam.

The third level, more prestigious and respectable than religion, is philosophy. Not as disciplined as science, perhaps, but most philosophers presumably have little patience for myths and fantasy. The crowning top level of the hierarchy of knowledge, of course, is science, with its methodological rigor and disdain for the imaginary and unreal. If broadly understood, science comes in two types, natural and social. Admittedly the latter (which shades over into the humanities) might be too interpretative and qualitative for certain quantitative hard-nosed natural scientists. In any case, both types of science rely on empiricism, detached observation, the systematic collection of facts, and are suspicious of that which is untestable. There are good reasons why modern societies have built this multi-layered intellectual edifice (it certainly resonates with the great achievements of the Enlightenment). And its success and accomplishments are impressive. But it can blind us to the storehouse of humanity, stocked as it is with all sorts of odd but useful pieces of the puzzle that make up the human condition. And when science habitually sweeps too many unexplainables under the rug of inquiry because they don’t accommodate conventional analysis or are not “respectable” as research topics, we fall prey to scientism. The point is many of us confuse the make-believe with the residues from an earlier mentality. But even fairytales have something to teach us.