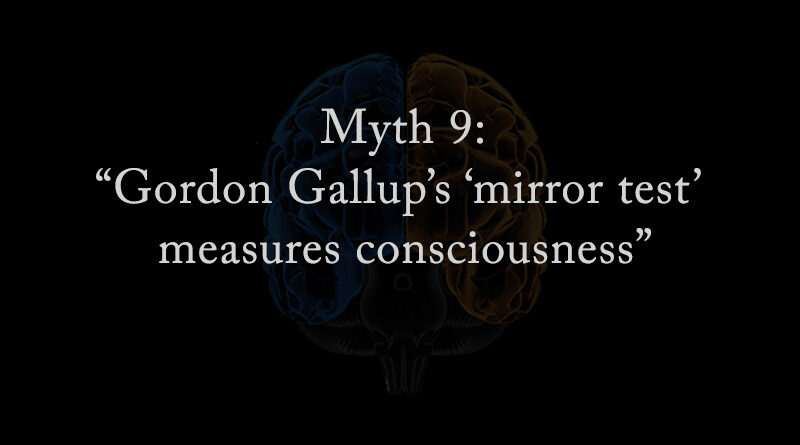 Myth 9: “Gordon Gallup’s ‘mirror test’ measures consciousness”
Also: “Chimpanzees can recognize themselves in a mirror, and this ‘provides clear evidence of self-awareness in chimpanzees'” (Griffin, 1978).

Fact: Julian Jaynes addresses this in the Afterword in the 1990 and later editions of his book (p. 460):

“This conclusion is incorrect. Self-awareness usually means the consciousness of our own persona over time, a sense of who we are, our hopes and fears, as we daydream about ourselves in relation to others. We do not see our conscious selves in mirrors, even though that image may become the emblem of the self in many cases. The chimpanzees in this experiment and the two-year old child learned a point-to-point relation between a mirror image and the body, wonderful as that is. Rubbing a spot noticed in the mirror is not essentially different from rubbing a spot noticed on the body without a mirror. The animal is not shown to be imagining himself anywhere else, or thinking of his life over time, or introspecting in any sense — all signs of a conscious life.

“This less interesting, more primitive interpretation was made even clearer by an ingenious experiment done in Skinner’s laboratory (Epstein, 1981). Essentially the same paradigm was followed with pigeons, except that it required a series of specific trainings with the mirror, whereas the chimpanzee or child in the earlier experiments was, of course, self-trained. But after about fifteen hours of such training when the contingencies were carefully controlled, it was found that a pigeon also could use a mirror to locate a blue spot on its body which it could not see directly, though it had never been explicitly trained to do so. I do not think that a pigeon because it can be so trained has a self-concept.”

See also: Julian Jaynes, “In A Manner of Speaking: Commentary on Cognition and Consciousness in Non-Human Species,” Behavioral and Brain Sciences, 1978, 1. Reprinted in The Julian Jaynes Collection.