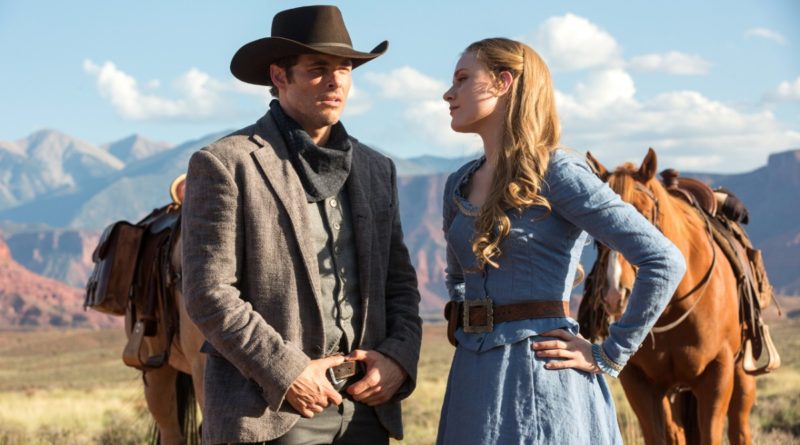 One of the main storylines of the show is that the “hosts” — the human-like robots that inhabit the Westworld park — are slowly transitioning from their scripted behavioral responses to becoming conscious (gaining self-awareness), and a central question we are left to contemplate is how this process is taking place.

This first episode contains some clues. We see the chief engineer Bernard Lowe questioning one of the oldest hosts in the park, Dolores, as to her beliefs about the nature of her reality. He does this under the auspices of verifying that she is functioning normally, but is Bernard actually clandestinely doing something to nudge Dolores toward consciousness and evaluating his progress? We don’t yet know.

Later, Bernard speculates that Dr. Robert Ford, the park director, has added “reveries” — which he describes as memories that cause subtle behavioral responses — to the latest update that the hosts received without informing anyone.

The use of the uncommon term “reveries” (and not “memories”) is an interesting choice, as it is used in the well-known first paragraph of Jaynes’s The Origin of Consciousness in the Breakdown of the Bicameral Mind:

“O, what a world of unseen visions and heard silences, this insubstantial country of the mind! What ineffable essences, these touchless rememberings and unshowable reveries! And the privacy of it all! A secret theater of speechless monologue and prevenient counsel, an invisible mansion of all moods, musings, and mysteries, an infinite resort of disappointments and discoveries. A whole kingdom where each of us reigns reclusively alone, questioning what we will, commanding what we can. A hidden hermitage where we may study out the troubled book of what we have done and yet may do. An introcosm that is more myself than anything I can find in a mirror. This consciousness that is myself of selves, that is everything, and yet is nothing at all – what is it?

And where did it come from?

This is the first subtle reference to Julian Jaynes’s theory that I noticed. The introduction of this element of autobiographical memory (allegedly by Dr. Ford) is perhaps the first major step toward consciousness for the hosts. We see in Jaynes’s theory that the beginnings of autobiographical memory, the ability to spatialize time, and the ability to view one’s life on a timeline are key elements in the origin of our own consciousness. Are the hosts being guided down the same trajectory that humans took toward learning consciousness?

Later, Ford’s “deep and dreamless slumber” command that puts the hosts in a “sleep mode” is very reminiscent  of a post hypnotic suggestion. Jaynes views hypnosis as a vestige of the bicameral mind. The fact that consciousness is learned and not biologically innate is in part what makes the alterability of consciousness we see in hypnosis possible.  Further, our past bicameral mentality is what predisposes us to follow an external, guiding voice.

Toward the end of this episode we also see one of the hosts go off-script, killing other hosts that in past narratives had killed him. The host also appears to be talking to voices and responding to bicameral-like hallucinations from someone named “Arnold,” saying: “Not gonna die this time Arnold.”

Finally, the episode ends with Dolores swatting a fly on her neck, an action that was not part of the host’s programming (to do no harm) and perhaps foreshadowing the beginnings of self-awareness.

At the conclusion of the first episode we are left to wonder what both Bernard and Dr. Ford are up to with regard to manipulating the hosts. Are they each encouraging elements of consciousness? If so, to what end? We don’t yet know who is doing what, if they are working together or individually (although the latter seems more likely), or what their motivations are.