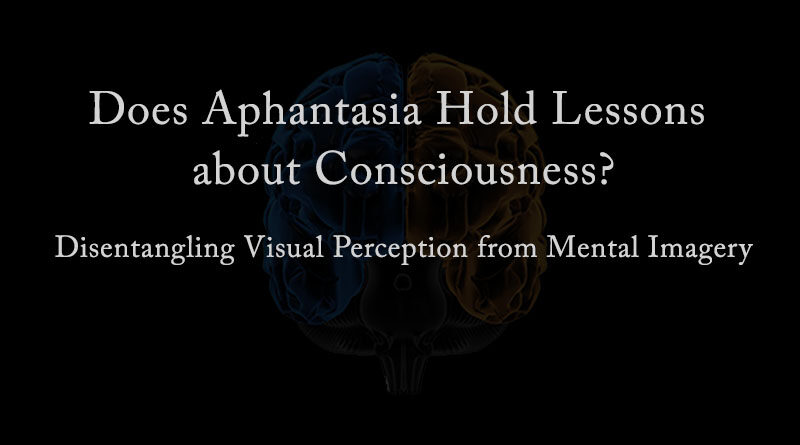 Science makes progress when it differentiates, discriminates, and separates out from the messy stuff we call reality what we can carefully classify, categorize, and singularize. If our taxonomy is not clear knowledge does not advance since the defining qualities of different properties, processes, and behaviors become confused. Consider psychology’s idiom that does not always distinguish between visual perceptual experiences and mental images. The latter can be defined as introspectable, conscious representations of things that are not actually present. Such images are imbued with a mysterious, almost magical aura because, in addition to being physically absent, they are not shareable with others; only the individual can directly experience images populating his or her inner psychoscape. And as of yet no convincing physical explanation accounts for their existence (neuroscientific studies, as important as they are, that simply correlate brain regions with mental activity do not count). It is almost as if mental imagery dwells in an unrecognized dimension of existence.

Recent research into aphantasia, or the inability or difficulty some have of conjuring up mental images (also misleadingly called “blind imagination”), raises some interesting issues. For one thing, aphantasia forces us to investigate the difference between perception and introspectable experiences. Aphantasia also demonstrates salient differences concerning how the mind works among individuals. Individuals with aphantasia do not lack imagination and they do not struggle with spatial memory (which is different from imagery and may be neurologically stored differently). Interestingly, research has shown that though they remembered fewer objects on tests, aphantasics made fewer mistakes, i.e., they did not create false memories of objects that were not in pictures used in the experiments. Aphantasics appear to be using compensatory strategies, such as the verbal-coding of spatial relations that might make them better at avoiding false memories (Bainbridge, et al., Quantifying aphantasia through drawing: Those without visual imagery show deficits in object but not spatial memory, Cortex, Dec. 3, 2020). Aphantasia may be congenital or acquired through trauma.

Though visual perceptions and mental images share the same neuroanatomical regions, they are very different, and despite being commonly confused, their differences are obvious. Visual perception requires stimuli and sensory receptors, involves both bottom-up and top-down processing, and may be implicated in perceptual illusions. Mental imagery, on the other hand, does not require external stimuli or sensory receptors. It involves only top-down processing and is implicated in hypnoidal experiences, hallucinations, and dreams. Interestingly, visual imagery can interfere with visual perception. When sense modalities are the same, mental images can override perceptual processes. However, when modalities are different individuals are able to perceptually focus on an object or auditory experience. And we might note that while one can experience mental imagery based on sound, smell, taste, or even touch, visual images are more common and easier to form than other sensory modalities.

Two theories have been developed to explain mental imagery. The first contends that a picture-like or “analog” code operates to produce images that retain some of the sensory qualities of visual perception. Relations among images are represented implicitly and simultaneously and each interiorized “sense” has its own type of modality. The second theory proposes a word-like or “propositional” code. Images are descriptions of visual scenes, their relations are represented explicitly and sequentially, and each interiorized “sense” possesses the same modality. Research seems to indicate that both theories have merit. Simple representations use an analog code, while propositional codes seem more apt for richly detailed images. This may be because our working memory can only contain a limited amount of information for complex visual stimuli.

A Jaynesian Perspective on Mental Imagery

Julian Jaynes argued that until about three millennia ago individuals lacked what we take for granted — subjective introspectable self-awareness. When confronted with a novel problem, hallucinated answers and admonishments were triggered that took the form of supernatural visitations. Probably the biggest reason people struggle with understanding Jaynesian psychology is because they confuse sensate-perception with introspection (the latter is what our mind’s eye “sees”; not our bodily, physical eyes). Even researchers commonly conflate perception with consciousness, or they assume that the latter is a mere epiphenomenon of sensation or is not a separate cognitive process in its own right. But sensate-perception (or perceptual reactivity) is automatic and nonconscious, while interiorized experience is a consciousness form of cognition.

If Jaynes is correct, hallucinations still perform an adaptive role in everyday life. However, over time, as hallucinations evolved, their vividness has been watered-down and they are now under volitional control. We call such experiences mental images. In other words, mental imagery is the descendent of ancient audiovisual hallucinations.

A taxonomy of four types can be proposed that teases out order from the roiling, churning, and mixing magma of perceptual, conceptual, and subjective experiences. The first type are perceptions (exteroception, interoception, proprioception, equilibrioception, etc.) which are automatic and nonconscious. Perceptions concern what is (realis). The second type, which like perceptions arise automatically and nonconsciously, are conceptions which are about irrealis (what could be). The third type are superceptions. These describe a layer of experience superimposed over perceptions and built upon conceptions. Superceptions are a mode of supercharged, subjunctive cognition of what might be (surrealis). They subsume three subtypes: (1) introceptions — inner quasi-perceptual, semi-hallucinatory images; (2) extraceptions — audiovisual hallucinations interpreted as divine voices and visitations in ancient times, experienced as transpiring outside but near the individual (peripersonal); and (3) vestigial extraceptions — anomalous behaviors, e.g., hallucinations experienced by schizophrenics and some neurotypicals (voice-hearers). A final type of mentation is coceptions. These describe the coincidence of perceptions and introceptions; such overlapping deludes us into assuming that consciously interiorized experiences are sensory reflections of reality.

If Jaynes is correct, the ability to evoke mental imagery is not innate but like other features of conscious interiority, learned. In other words, the counterpart of aphantasia, phantasia (imagery) is culturally acquired. If this is the case, we should be able to discern historical differences in the amount of phantasia, and as Jaynes argues, it is very difficult to find accounts in texts and languages of mental imagery before about the twelfth century BCE. Research into aphantasia may offer us clues about mental imagery as being a culturally-acquired ability and help us stop confusing two very different processes: sensate-perception versus conscious, interiorized experience. In other words, studying aphantasia may aid in teasing apart the threads of perceptual, conceptual, and introceptual experiences.