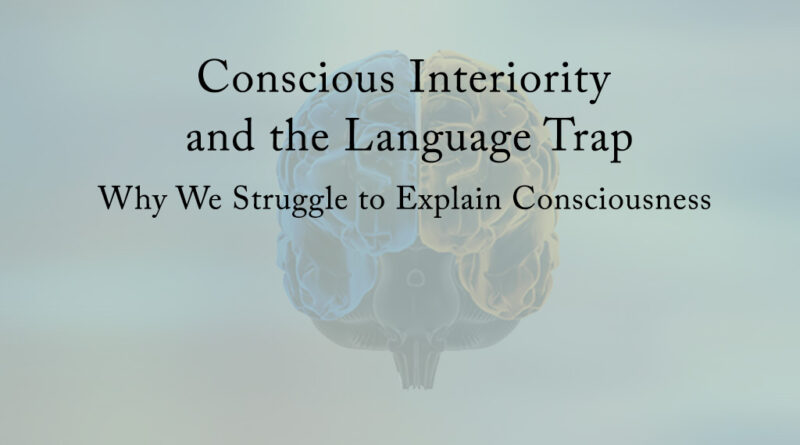 Cleaning up the mess surrounding the uses of “consciousness” is not an airy, abstruse, or esoteric subject, a topic only for absent-minded academics with their heads in the clouds. This discussion has serious, profound, and practical implications. Neuroscientists employ terminology to delineate the differences between being asleep, in a coma, or in a state of ordinary consciously interiorized mentation. Physicians, psychiatrists, psychotherapists, counselors, and other mental health care providers need to be able to differentiate various forms of cognition to facilitate healing.

The Tyranny of Words: The Mystification of “Consciousness”

“How many months have 28 days?” Not a few people answer — incorrectly — only one (February). Others struggle, at least initially, with “A truck driver goes down a one-way street the wrong way. Why isn’t he ticketed?” or “Which weighs heavier, a ton of feathers or a ton of gold?” Such trick questions teach us how words operate like gravity, pulling us toward orbits of implied meanings, connotations, and associations. Like a powerful force, they push and pull our patterns of thought toward nuances, undertones, and overtones. Their unspoken subtexts and suggestive subtleties trap us in grooves of misleading thinking.

Consider “consciousness.” Because it is rarely defined in the literature (or if it is, the definition is tautological), it is notoriously vague, employed variously to indicate: (1) the physiological state of not sleeping; (2) the physiological state of not being in a coma; (3) sensory perception; (4) cognition, thinking, reasoning; (5) what one’s inner self introspects upon, i.e., awareness of awareness, thoughts about thinking, desires about desires, beliefs about belief; (6) the mutual self-awareness of a group (e.g., national consciousness, class consciousness).

“Consciousness” is too imprecise to be of any practical use for research purposes. It causes confusion and conflation. Worse, its use not infrequently borders on pseudo-scientific New Ageism that can be best characterized as “mystical science” or “scientific mysticism.” A more precise, refined set of terms should be utilized to describe various psychological phenomena.

Julian Jaynes controversially argued that consciousness is not biologically innate (nature); rather, it is culturally constructed (nurture). In other words, it is not a consequence of evolution but rather a sociocultural, historical invention that appeared in full form about three millennia ago. Jaynes defined consciousness as: An “analog of what is called the real world. It is built up with a vocabulary or lexical field whose terms are all metaphors or analogs of behavior in the physical world. Its reality is of the same order as mathematics. It allows us to shortcut behavioral processes and arrive at more adequate decisions. Like mathematics, it is an operator rather than a thing or repository. And it is intimately bound up with volition and decision” (Jaynes, The Origin of Consciousness in the Breakdown of the Bicameral Mind, 1976, p. 56).

Actually, a careful reading of The Origin of Consciousness book (something the critics of Jaynes often fail to do) reveals that he conceptualized consciousness as a package of six features. Consciousness, then, is really shorthand for an array of specific cognitive capabilities. I’ve expanded his list into what I call Features/Functions of Conscious Interiority (FOCI). These describe instances of adaptive reframing, abstracting, and metaphorizing in order to better navigate through the world: (1) mental space (introspectable stage for manipulating mental images); (2) introception (employing semi-hallucinatory, quasi-perceptions to “see” different perspectives); (3) “I” (subject‒self; the active, observing aspect of selfhood); (4) “me” (object‒self; the passive, observed aspect of selfhood) (the interplay of “I” and “me” increase role/perspective-taking); (5) self-narratization (imaginary personal timeline; intensifies retrospection/prospection and planning capabilities); (6) excerption (editing mental contents for higher-order conceptualization); (7) consilience (fitting conceptions together more effectively to bolster abstraction); (8) concentration (mental analog of perceptual attention; peripheralizing unrelated mental material in order to enhance focus); (9) suppression (mental analog of physical avoidance; deleting distracting and distressing thoughts); (10) self-authorization (attributing one’s decisions and volitional behavior to an agent); (11) self-autonomy (bolstering self-direction and self-confidence); (12) self-individuation (highlighting personal strengths); (13) self-reflexivity (the indescribable sense of one’s own selfness; cultivates insight, self-objectivity, and self-corrective abilities).

The muddle surrounding consciousness arises because: (1) common linguistic habits fool us into believing that nonconscious percepts and consciously-interiorized percepts (i.e., introceptions) are the same; (2) sensory perceptions and consciously-constructed quasi-perceptions sometimes align (generating coceptions), convincing us that they can be equated; (3) percepts can be isolated as distinct nonconscious phenomena under laboratory settings so we assume that we can consciously experience such sensations. The perceptual and introceptual both partake of “perceptional” experiences. However, the introceptual is a quasi-perceptual or not-quite sensate; it is virtualized perceptual sensation. Conscious interiority is a singular form of mentation; it is not a mere epiphenomenon of perception.

Disentangling a particular psychological state called consciousness from other forms of mentation presents a challenge. Ordinary human languages simply are not equipped to slice and dice psychic operations, i.e., we can’t assume that everyday words naturally reflect mental operations. Let’s begin by offering a map of all mentation based on two dimensions. The first is sensate versus nonsensate psychological processes. The second is nonconsciousness (nothing to do with not sleeping or being comatose) versus consciousness (nothing to do with being awake or not being in a coma). From combining these two dimensions four types of mentation result. The first is perception, which describes a flood of sensations and impressions, sensory awareness, and physical effects (what Jaynes referred to as “perceptual reactivity”). Unless consciously registered, percepts are nonconscious. Once consciously interiorized, percepts enter and populate our psychoscape and become introcepts. The second type is conception. It is nonsensate and non-experiential. Purely conceptual, it is a realm of representations, reasoning, and thinking invisible even to our mind’s eye (note that we are conscious of the products, not the processes, of mentation). The third and fourth types are Jaynesian consciousness, i.e., FOCI. These latter two types—third and fourth—are characterized by an inexplicable sense of selfness, separateness from others and the world, and highly individualized identity (self-individuation). The third type is introception composed of quasi-perceptions of our psychoscape. This introcosmos is colored by semi-hallucinatory qualia whose images are “seen” by the mind’s eye. The fourth type is non-introceptual consciousness and concerns solutions to problems/decisions that might be described as “imageless thought.”

“Coninteriority”: Time for a New Term?

Years ago Prof. Jaynes himself acknowledged to me that the vagueness and polysemantics of “consciousness” were inconveniently and frustratingly misleading. A number of terms have been used to denote what Jaynes meant by consciousness. Some are problematic: “Awareness of awareness” smacks of circular reasoning. “Self-awareness” only indicates one aspect of Jaynesian consciousness. Other expressions have potential: “Meta-cognition” captures the sense of a level of mentation transcending ordinary psychological processes, as does “meta-awareness.” “Conscious cognition” at least indicates that some forms of mentation are not conscious. “Subjective introspectable self-awareness” is a bit wordy but at least suggests the qualia aspect of what Jaynes intended. “Jaynesian consciousness” is certainly a doable suggestion. The linguist John Limber helpfully suggested “J-consciousness” (or “J-con” which sounds like some sort of convention or conference).

After considering this troublesome and ambiguous word — i.e., consciousness — for many years I prefer to use “conscious interiority” to inject much-needed clarity. This term suggests a spatialness or the belief that a mental space exists “in” the head in which a self moves about, psychological events and processes transpire, and where we experience quasi-perceptions (introceptions). Interiority, connoting feelings, opinions, thoughts, personality, and other self-individuated “inner stuff” (but not reducible to any of these) as well as experienced qualia, is contrasted with what is externally assigned by society (kinship, occupational, gender roles, inherited rank, religious affiliation, and other statuses). In any case, I also wonder if it is time for another neologism. At the risk of sounding presumptuous, I tentatively suggest “coninteriority,” a word intended to convey the semantics of interiority but still carrying the associations of consciousness.