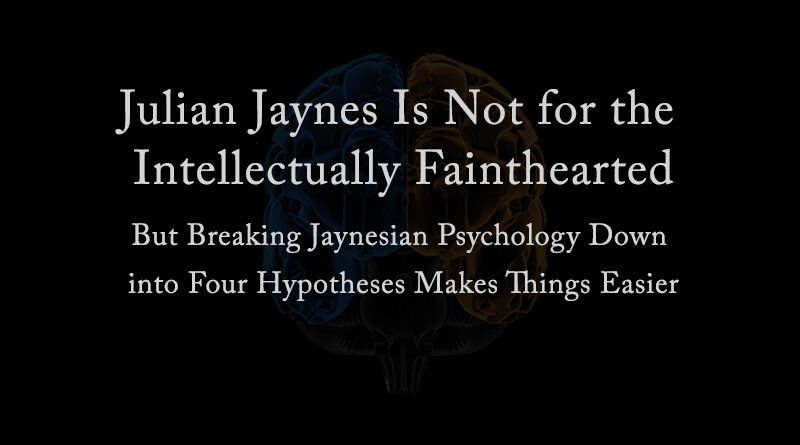 I first encountered Julian Jaynes’s The Origin of Consciousness in the Breakdown of the Bicameral Mind almost 45 years ago. Though the book made sense to me, I could see why people would reject its arguments. Nevertheless I assumed that once carefully explained, people may not agree but would at least be able to discern a certain logic behind Jaynesian psychology. How naïve I was.

It has been an uphill battle and many years later I am more realistic about convincing others of the validity of Jaynes’s arguments. In other words, I am not particularly hopeful that many people can be persuaded of what Jaynes had to say. To me what seems blindingly obvious is apparently not so clear to others. I hasten to add that this has nothing to do with one’s intelligence or academic accomplishments, since many well-credentialed commentators still regularly misinterpret Jaynes. Rather it involves the challenge of looking at matters from a different angle, such as interrogating the assumption that the ability to experience consciousness was evolutionarily baked into our neuroanatomy.

Why should understanding Jaynes be so hard? Again, one does not have to agree with Jaynes. But before dismissing his ideas, we are obligated to first understand them before we critique them. There are numerous reasons why Jaynes is difficult to intellectually digest, but here I highlight two. The first and biggest obstacle concerns one word that has been rendered useless in both the academic and popular scientific literature: Consciousness. Jaynes clearly defines what he means by this term but this is apparently neglected for some reason, even by those who claim to have read his book. I will not discuss this issue here as it has been addressed in many other places. I will only point out that Jaynes is easy to give up on if you do not know what he meant by the single word “consciousness.”

Another deterrent is the sheer range of topics Jaynes covers. It is his adventurous tour through archaeology, linguistics, religious history, psychology, and neurology that many serious academics no doubt find off-putting. Audaciously delving into so many fields with which presumably the average reader is unfamiliar can be a hindrance. Truly he is not for the intellectually timorous, those who like bumper-sticker science (i.e., short and sweet), or the typical scholar who is trained to climb the ladder of academic success by specialization, subspecialization, etc., so that each individual tree is clearly seen standing but the expansive canopy of the forest disappears.

We might also add that perhaps Jaynes’s conversational writing style comes off as simplifying what are regarded as complicated issues. But don’t let his informal and relaxed tone fool you; he sets the reader up for startling conclusions driven by a relentless, highly organized line of reasoning, theoretical clarity and coherency, and a boldness of thought rarely matched in much of the scholarly psychological literature.

“Extraordinary claims require extraordinary evidence.” Carl Sagan reworded and popularized the French astronomer, physicist, and mathematician Pierre Simon Laplace’s (1749–1827) principle that “the weight of evidence for an extraordinary claim must be proportioned to its strangeness.” In other words, big theories require big data. But we need to break imposing claims down into manageable propositions, and this is what Jaynes did with his four hypotheses:

(1) The Linguistic Construction of Consciousness. Subjective introspectable self-awareness is a learned process based on metaphors. Consciousness, then, is shaped by historical-cultural forces and is not the outcome of evolutionary forces.

(2) Bicameral Mentality―An Earlier, Preconscious Mentality. Before people learned to be conscious, a different mentality governed their behavior. Called bicameral for “two-chambered,” this mentality generated audiovisual hallucinations that were attributed to supernatural beings.

(3) The “When” of Consciousness. Though the transition occurred at different periods in various parts of the world, in most places consciousness emerged around the end of the second millennium BCE.

(4) The Neurology of the Double Brain. If Jaynes’s claims are valid about an earlier, preconscious mentality, its underlying “two-chambered” neurology must be accounted for. This concerns the lateralization of language. More specifically, the change from a preconscious bicameral mentality in which the right hemisphere generated hallucinations to a conscious unicameral mentality needs to be scientifically explained.

These four hypotheses are really just the beginning. They can generate subhypotheses and then sub-subhypotheses that can be tested. As a scientific program, then, Jaynesian psychology can advance by framing smaller hypotheses, formulating theories, and having these empirically analyzed.

2 thoughts on “Julian Jaynes Is Not for the Intellectually Fainthearted”