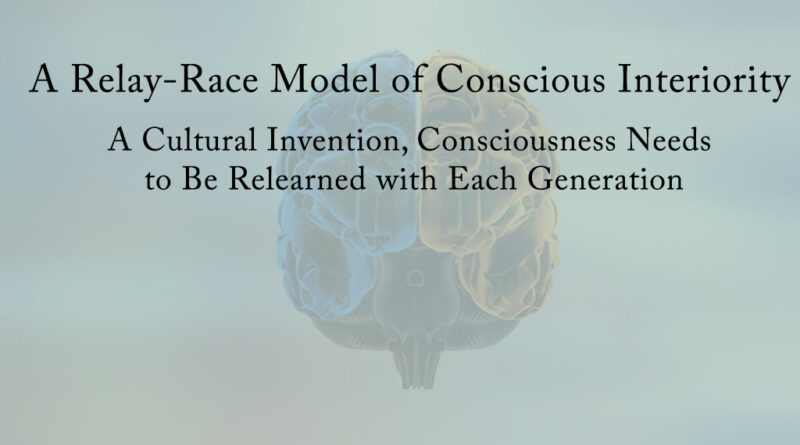 The word “consciousness” usually evokes something neuroanatomical, intimately bound up with perceptual experiences, an evolutionary psychological feature from our very distant past that is inherent to the brain itself. Consciousness for many seems to be a general term for any type of sensory, conceptual, or thinking process. This leads to muddled theorizing.

But what if we carefully restrict “consciousness” to mean subjective introspectable self-awareness and trace its actual development? This was exactly what Julian Jaynes did. His analysis of the historical record revealed that before about the first millennium BCE words in ancient language to describe psychological experiences were at best, surprisingly sparse. This is a startling datum, and Jaynes concluded that individuals were not conscious as we understand the term. Jaynes also theorized that the supernatural visitations ubiquitously described in the historical record evidence a preconscious mentality in which individuals attributed commanding audiovisual hallucinations to their ancestors and gods. Based on his findings, Jaynes argued that rather than being a product of evolution passed down genetically, consciousness—or as I prefer to be more precise, conscious interiority—was a cultural invention generated by linguistic forms in the crucible of civilizational collapse. What we have, then, is a “relay-race model” of conscious interiority. In other words, since it is a product of sociohistorical development, it must be transmitted generation to generation via socialization and relearned. In the same way runners pass off a baton to the next runner in a relay race, society at large, particularly parents, must impart to their children a package of cognitive skills that unfolds as conscious interiority.

What this means is that if we could use a time machine and transport a newly born infant from the present-day to sometime before about 1000 BCE, that infant would be enculturated to be nonconscious and experience command hallucinations. By the same token, if an infant from before the first millennium BCE were magically materialized in our century to be raised, he or she would become conscious. In this sense conscious interiority has nothing to do with genetics. It is a sociocultural invention disseminated by language.

If the relay-race model is correct, a number of important conclusions can be drawn. First, while many mental abilities are transmitted genetically (and then inflected within a cultural context), conscious interiority is not one of them. Second, conscious interiority is a product of sociohistorical development and requires a specialized linguistic field of mental words. An examination of ancient texts should bear this out (e.g., Brian J. McVeigh, The “Other” Psychology of Julian Jaynes: Ancient Languages, Sacred Visions, and Forgotten Mentalities, 2018). Third, there is a species specificity to conscious interiority. Since animals other than homo sapiens lack the prerequisite neurological apparatus needed for sophisticated sociocultural patterns and language, they can never be conscious. Only humans can. The fourth point concerns historicity. Though mental abilities obviously existed prehistorically and in preconscious times, conscious interiority appeared during a certain historical period due to socially pragmatic causes (i.e., population increase and complexity). Finally, though certain mental abilities are universal, conscious interiority, as a sociohistorical development, was not necessarily common to all societies at the same time and to the same degree. However, the approximate date of 1000 BCE is a good baseline based on the evidence.